5 things to know this weekend

Hanna expected to hit southern Texas coast as a hurricane

Tropical Storm Hanna is expected to hit the southern Texas coast as a hurricane on Saturday afternoon or early evening, forecasters said. Early Saturday, the U.S. National Hurricane Center said the storm was centered about 140 miles east-southeast of Corpus Christi with maximum sustained winds around 65 mph. Forecasters said Hanna could bring 5 to 10 inches of rain through Sunday night, in addition to coastal swells that could cause life-threatening surf and rip current conditions. Hanna broke the record as the earliest eighth Atlantic named storm, according to Colorado State University hurricane researcher Phil Klotzbach. Meanwhile, Tropical Storm Gonzalo was taking aim on the Windward Islands of the Caribbean, with the storm expected to impact the region Saturday; and Hawaii was bracing for the arrival of Hurricane Douglas, which was expected to move across the island chain on Sunday. 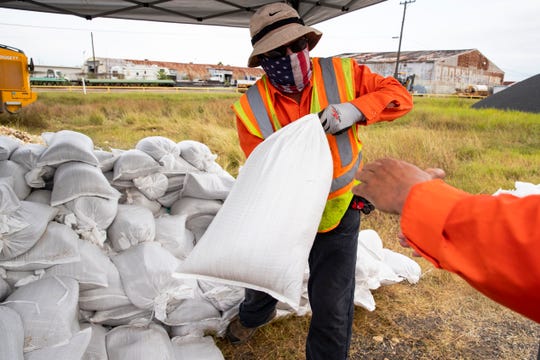 Employees with the City of Corpus Christi load sandbags in to peoples cars as Tropical Storm Hanna approaches on Friday, July 24, 2020, in Corpus Christi, Texas. Tropical Storm Hanna formed in the Gulf of Mexico on Thursday, hours after Texas Gov. Greg Abbott announced various resources to respond to severe weather are on standby across the state. (Photo: Courtney Sacco, AP)

A WNBA season like no other will get underway on Saturday with three games in Brandenton, Florida, where all 12 teams are isolating. WNBA Commissioner Cathy Engelbert, league staff and the player’s union worked together on a plan to tip off the league’s 24th season at a single site during the coronavirus pandemic. They coordinated on medical protocols and the logistics of playing in one location. After a couple of weeks in the bubble, the plan seems to be working. There have only been two positive tests for the coronavirus by staff and players, and those were in the first few days when people arrived on July 6. There have been none since.

The extra $600 in unemployment benefits expire Saturday for millions of jobless Americans who are relying on them to make ends meet. Lawmakers scrambled Friday to put the finishing touches on a bill that would include another round of $1,200 stimulus checks and replenish funding for unemployment benefits as first-time jobless claims surge nationwide, but ultimately did not clinch a deal on a pandemic aid package. According to Senate Majority Leader Mitch McConnell, the details of the proposal should be revealed early next week. For some Americans in some states, their unemployment earnings are being slashed by more than half– a grim scenario for the more than 24 million Americans who fear they won’t be able to make rent next month as benefits dry up.

As Americans with Disabilities Act turns 30, access to voting still an issue

Alcohol sales will be banned across Puerto Rico on Sundays and nearly all businesses will remain closed that day to help control a rise in cases in the U.S. territory, Gov. Wanda Vázquez announced. The changes are the newest measures implemented as Puerto Rico sees a spike in COVID-19 cases that forced rollbacks in recent days as more tourists visit the island. “Things have gotten out of control on weekends,” she said. “Many people are forgetting that we still face an emergency because of the COVID-19 pandemic.” On Monday, the island of 3.2 million people reported at least 180 deaths, along with more than 4,000 confirmed cases and more than 8,400 probable ones. Starting July 26, all businesses except pharmacies, grocery stores, gas stations and restaurants will have to close on Sundays. Vázquez noted that churches are allowed to remain open.

Updates from Friday around baseball