Contact tracing efforts are being ramped up in an effort to curb surging transmission rates in some of Canada’s COVID-19 hot spots, with Prime Minister Justin Trudeau promising more federal support and Quebec becoming the latest province to join the COVID Alert app.

Trudeau said Monday that the government has signed agreements with Alberta, Ontario and Quebec to provide federal employees to help with contract tracing in coronavirus hot spots.

Contact tracers advise those who may have been exposed to COVID-19 to self-isolate or get tested to mitigate the spread of the virus. Delays in reaching out to them can interfere with the efficacy of contact tracing.

WATCH | What it’s like being a contact-tracing COVID-19 detective:

The National’s Adrienne Arsenault spends a day with contact tracers in London, Ont., who help figure out where someone caught COVID-19 and determine who else may be at risk. 3:43

“Contact tracing is extremely effective in terms of tracking down cases, especially if it’s done in a very timely manner,” Trudeau said. “Once you start getting into backlogs, apparently, it becomes more difficult to have contact tracing be as effective.”

Trudeau said 500 public servants will be on hand to support Ontario’s tracing efforts, with 30 tracers specifically assigned to the city of Ottawa.

The public health unit there has warned that its health-care system is at a breaking point, with dozens of new cases being reported each day, each with a list of possible contacts to track down.

Meanwhile, a smartphone app designed to bolster contact tracing is being rolled out in more provinces.

Quebec has joined the COVID Alert app, becoming the sixth province to do so after Ontario, Manitoba, Saskatchewan, New Brunswick, and Newfoundland and Labrador.

Nova Scotia and P.E.I. have committed to joining in the coming days, leaving B.C. and Alberta as the only remaining provinces with no immediate plans to activate the federal government-administered digital tool.

The app, which has been downloaded more than 3.3 million times since it was launched on July 31, allows users to report a positive coronavirus test and alert others to a potential exposure.

At least 800 users across the country have reported a positive test through the tool. Most of the reporting has so far come from Ontario, which was the first province to activate the app. Federal officials have said the more users install it, the more effective it will be.

WATCH | Quebec’s premier says COVID Alert is safe to use: 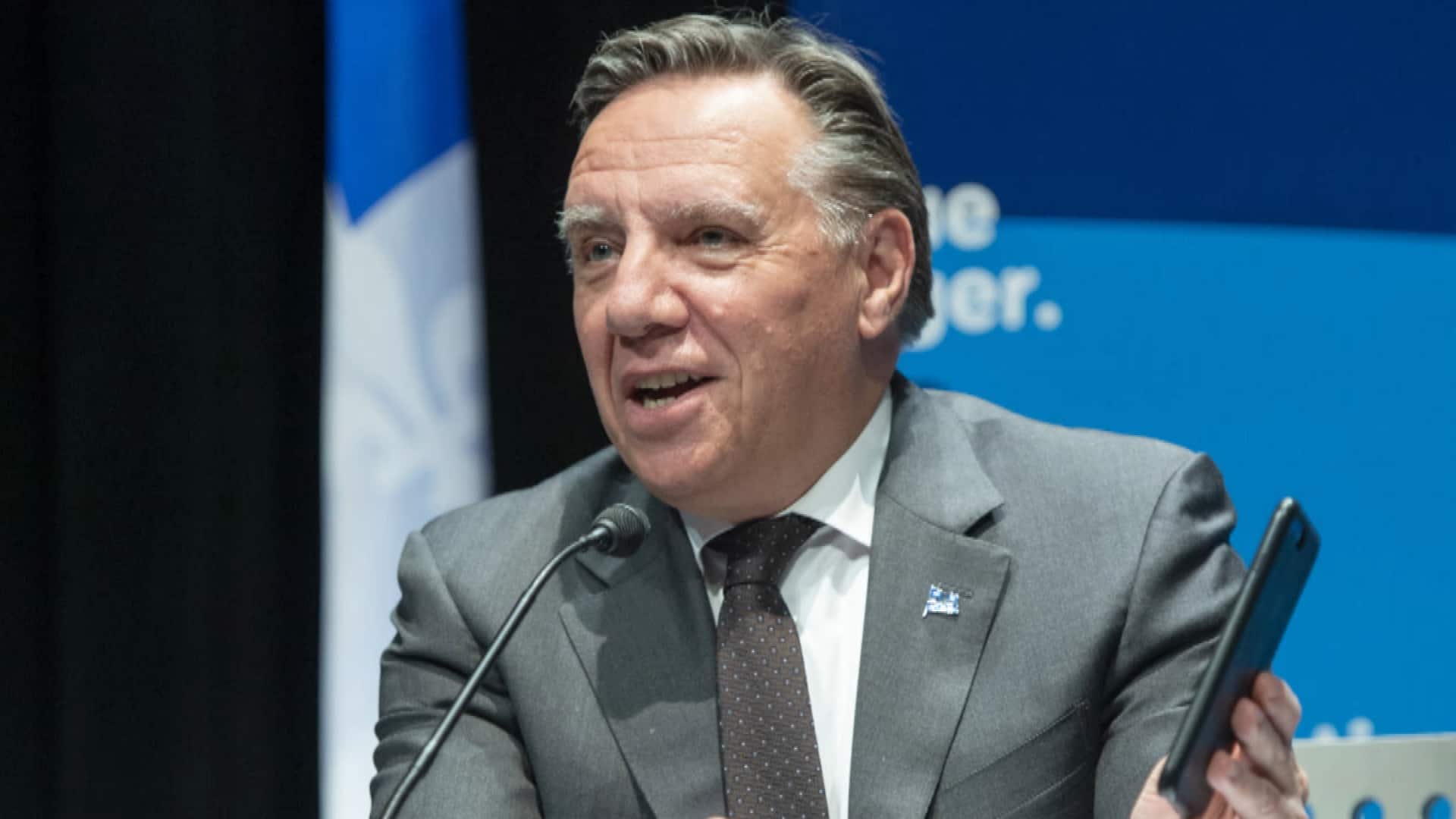 Premier François Legault says the situation is critical and the COVID Alert app is a safe tool to help trace exposure to the virus. 1:52

But there have been calls for the federal government to authorize more features to increase the app’s potential effectiveness, such as allowing users — or even public health officials — to be told how frequently people are spending extended periods in close contact with others. The prolonged exposure is considered a driver of coronavirus transmission.

B.C. Provincial Health Officer Dr. Bonnie Henry recently said the province is working with federal officials “to make some adjustments that will meet our needs” before adopting the app.

Health Canada hinted last week at two potential additions to come, while stressing its priority remains for all provinces and territories to join and allow residents to report a positive test through COVID Alert.

As of 12:45 p.m. ET on Tuesday, Canada had 170,872 confirmed or presumptive coronavirus cases. Provinces and territories listed 143,733 of those as recovered or resolved. A CBC News tally of deaths based on provincial reports, regional health information and CBC’s reporting stood at 9,526.

U.S.-based Abbott Laboratories can now sell and distribute the Panbio COVID-19 Ag Rapid Test Device, which can produce results in less than 20 minutes. Health Canada has authorized it as a point-of-care test, meaning it can be used by trained professionals in pharmacies, walk-in clinics or doctors’ offices.

The antigen rapid tests — which, depending on the device, use matter collected from a nasal or throat swab — don’t require the use of a lab to generate results.

While much faster, these tests are considered to be less accurate than the “gold standard” — the polymerase chain reaction (PCR) testing process currently in use across Canada.

Quebec reported 1,364 new cases of COVID-19 — the highest single-day total ever reported in the province — and 17 more deaths on Tuesday.

Hospitalization rates also continued to rise, with an increase of 36 in one day, bringing the total now in hospital for COVID-19 to 397.

With the province marking its fifth consecutive day with over 1,000 cases recorded, Health Minister Christian Dubé issued a sobering message on Twitter. “This second wave is claiming victims,” he wrote. “Sacrifices are necessary to have as few victims as possible.”

Ontario reported another 548 cases of COVID-19 on Tuesday, with nearly two-thirds of new cases in the Greater Toronto Area. Health Minister Christine Elliott said about 61 per cent of the new cases are in people under 40 years old.

The province’s network of labs processed more than 42,000 test samples for the novel coronavirus, while the backlog sits at 55,483. 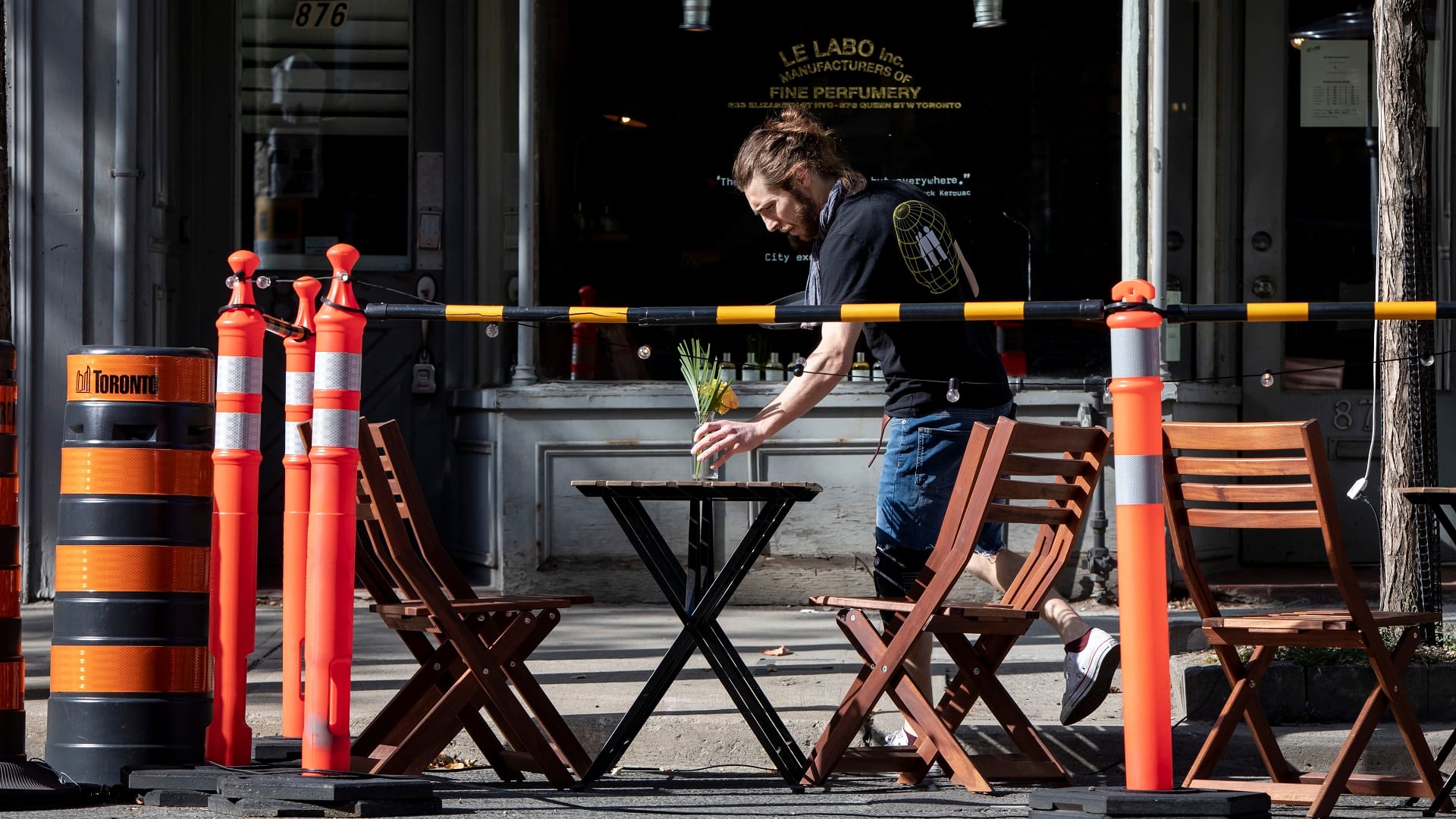 Ontario Premier Doug Ford says he will use hard evidence and data to make any decisions about shutdowns, and asks the public to consider the situation for small businesses owners who may be ‘your neighbors, your friends.’ 1:24

To help labs clear the backlog of test samples, which at its highest grew to more than 92,000, the province’s appointment-only testing plan has officially came into effect. Health experts have warned the shift could result in artificially low new daily case counts later this week.

Trudeau has announced some federal laboratories will be re-purposed to help provinces ramp up testing. He said the labs will run 1,000 tests a day in Ontario, with more capacity to be brought online in the coming days.

P.E.I. is stepping up public health enforcement against COVID-19 with new rules around work-isolation.

Workers, who are not in health care or designated as rotational workers who are regularly in and out of the Atlantic bubble, must now apply to be allowed to work-isolate. Work-isolation allows people to go to work with special restrictions, but otherwise they must stay at home.

Alberta’s chief medical officer of health has warned that the surging number of COVID-19 cases in the city of Edmonton could lead the province to impose additional measures to bring down the level of transmission.

Dr. Deena Hinshaw said one of the factors leading to the climbing numbers in the city is that some Edmontonians — 11 per cent of active cases — are attending work or social gatherings while symptomatic and awaiting test results.

“This is a significant risk and is one of the factors causing our case numbers to rise,” she said. “I want to be clear: if you are sick, you need to stay home.”

According to the province’s data, between Sept. 28 and Oct. 4, there were 714 new cases in the Edmonton zone, compared to 502 new cases in all other zones combined.

On Monday, the province reported eight more deaths due to COVID-19 over the last three days and 578 new cases of the virus.

WATCH | Doctor and YouTuber on how to combat COVID-19 misinformation: 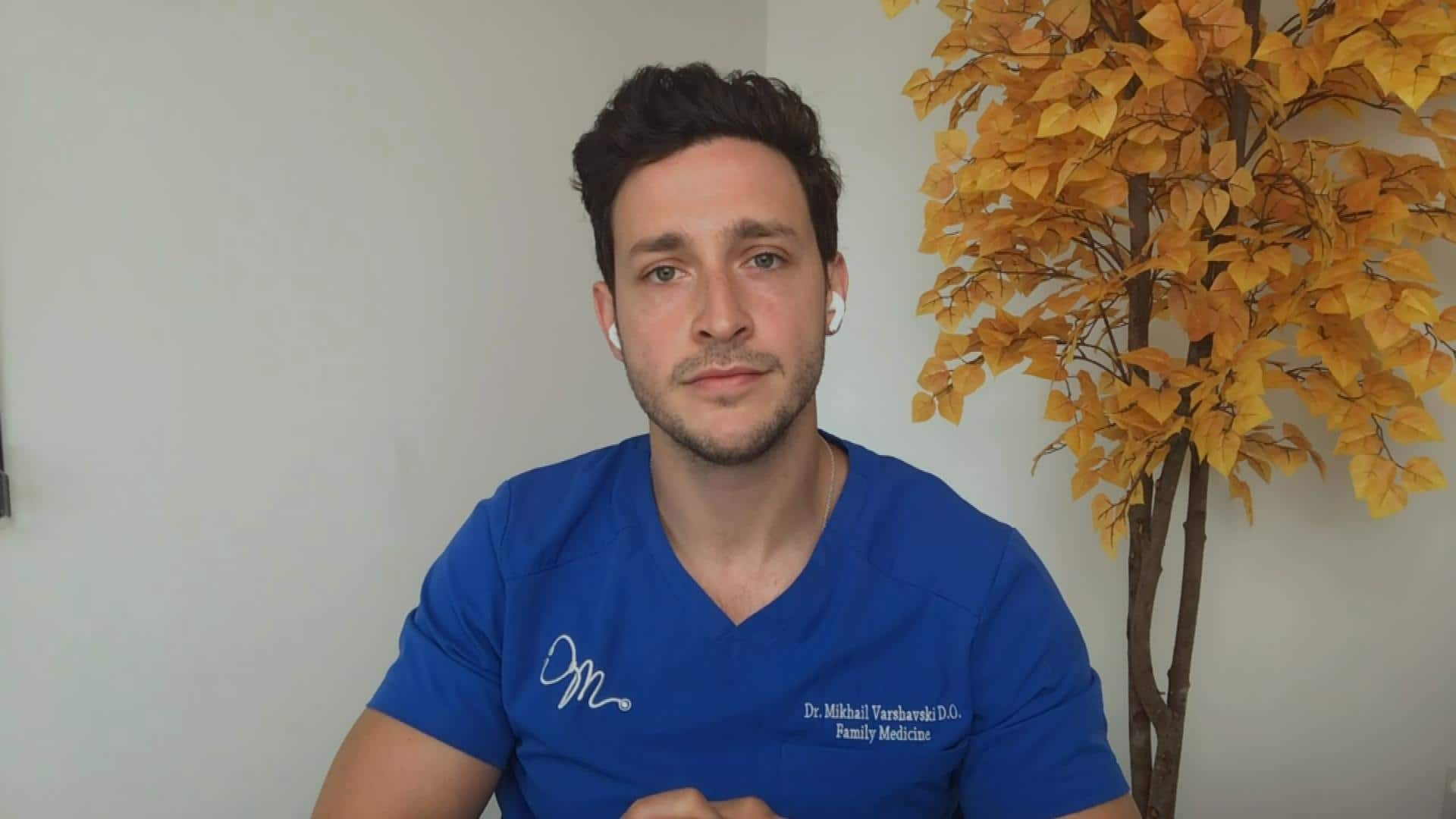 Family medicine doctor and YouTuber Dr. Mike Varshavski says social media misinformation is fuelled by a lack of credited individuals on these platforms who can counter inaccurate claims. He says the best way to reach young people is for governments to partner with social media creators to provide accurate information. 2:22

In Manitoba, 51 new confirmed cases were announced on Monday, with the province’s public health chief saying patients as young as 17 years old have been hospitalized with COVID-19.

Public health officials also announced new restrictions in an effort to combat the spread of the disease. Starting Oct. 7, restaurants and bars in the Winnipeg area under the orange pandemic response level will have to stop serving alcohol between 10 p.m. and 9 a.m.

According to Johns Hopkins University in Baltimore, the global total of confirmed coronavirus cases stands at more than 35.5 million. More than 1,040,000 people have died, while over 24.8 million have recovered.

In Asia, Japan and South Korea have agreed to resume business travel between the two countries starting Oct. 8, according to the Japanese Foreign Ministry. South Koreans will be able to enter Japan for business and conduct work but will be required to undergo a 14-day quarantine after entry, the ministry said in a statement Tuesday.

India has registered 61,267 new coronavirus cases, its lowest daily increase since Aug. 25. The country with nearly 6.7 million reported infections has had the highest single-day increases in the world for nearly 45 days. The last three weeks, however, have seen a gradual decline.

In Africa, 15 clinical trials of COVID-19 vaccines are underway across the continent, according to a comment published in the journal Nature by the Africa Centers for Disease Control and Prevention — five trials are occurring in South Africa and four in Egypt, with a single trial each in Guinea-Bissau, Ghana, Uganda, Kenya, Zambia and Zimbabwe.

African nations have teamed up to combat the pandemic, with painful memories of millions of Africans dying in the decade it took for affordable HIV drugs to become available on the continent.

In Europe, North Macedonia says it will relax border restrictions for visitors from four neighbouring countries. Effective Oct. 12, visitors from Serbia, Kosovo, Montenegro and Bosnia and Herzegovina will no longer have to carry negative COVID-19 test results to be allowed entry, officials said Tuesday.

Italy’s health minister says the government is examining a proposal to make masks mandatory outdoors, with the number of infections growing steadily for the last nine weeks. Roberto Speranza said that as infections spread, it is necessary to return to restrictions that were gradually loosened over the spring and summer months after Italy’s strict lockdown of nearly three months.

In the Americas, Argentina has the world’s highest rate of positive tests, according to Oxford-linked tracker Our World In Data, with nearly six out of 10 yielding an infection, a reflection of low testing levels and loose enforcement of lockdown rules.

Argentina’s government won plaudits for a tough early lockdown that began March 20, but since then has been forced to loosen restrictions to help revive an economy already in recession for two years and as poverty levels and unemployment have risen.

Tue Oct 6 , 2020
Share on Facebook Tweet it Share on Google Pin it Share it Email Appliance stores are grappling with a double whammy of surging demand and supply chain problems, resulting in mounting backorders ahead of the busiest shopping season of the year. Retailers say a combination of home renovations, new construction, […]