Kelly is appealing his suspension, while Roberts will serve his on Wednesday night. Astros manager Dusty Baker also received a fine.

Roberts said Wednesday afternoon that he had spoken to MLB officials, who were angry about the incident, particularly with players and coaches getting close to one another after the benches emptied.

“They were not pleased,’’ Roberts said. “Baseball is under a microscope right now. But as coaches, myself included, I have to do a better job of guys staying on the bench.  When tempers flared, I tried to get out there and keep it at bay, and minimize it, but I’ve got to make sure guys stay on the bench and follow protocols.’’

Baker and Roberts did not anticipate retaliation after Kelly threw a 96-mph fastball over the head of Alex Bregman, and a curveball over Carlos Correa’s head, but no one knows for sure.

“Probably not, but I don’t have a crystal ball,’’ Baker said. “How do I know? We didn’t start it . I couldn’t tell you anyway. I talked to my guys about it. What happens if somebody gets hit tonight? Again, how do you evaluate intent?’’

Said Roberts: “I’m not worried. I don’t think they will. If they do, I think the umpires will address it and act accordingly.’’ 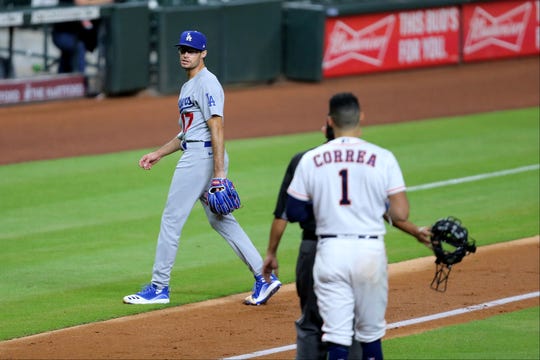 Kelly’s actions made him an instant folk hero in Los Angeles for retaliating against the Astros in the wake of their cheating scandal, and Roberts acknowledged that it was an emotional release. The Dodgers were the team most critical of the Astros in the aftermath of MLB’s report that they cheated using electronic signals during the 2017 season.

Houston beat the Dodgers in seven games in the World Series, preventing the Dodgers from winning their first title since 1988.

“This is something that has built up over the course of seven months after the findings,’’ Roberts said. “It sort of released. It was unfortunate, but to spin it, it’s a good thing we got it out of the way and move on and play baseball.’’

Dodgers pitcher Ross Stripling, who said during the spring that he would considered intentionally hitting the Astros if he faced them, said that Kelly’s actions were well received in the clubhouse, particularly with the faces he made towards Correa. He even joked that a T-shirt may be made and passed around to the players.

“The face that he made is one of the funniest things I’ve ever seen on a baseball field,” Stripling said.

Sorry, but the Astros didn’t share the humor, and still were incensed a day later.

“Joe Kelly threw a ball behind Bregman’s head on 3-and-0 on purpose,’’ Astros pitcher Lance McCullers said. “Not only did he take it upon himself to send a message, but he wasn’t even part of that [2017] team.

“We knew coming into the game he likes to go off script. What he did was unprofessional.’’

Roberts said Wednesday he was warning his teamto make sure no one leaves the bench again for any skirmish.

“I’m going to talk to the guys briefly about leaving the bench,’’ Roberts said. “MLB is really serious about this, as well as they should be. I have to reiterate it to guys, at any cost, to stay on the bench.’’

The Astros and Dodgers play their final game of the series at Minute Maid Park in Wednesday night, and won’t play one another again until September at Dodger Stadium.

US over 150K deaths; Barr gets tested; Florida record