It’s a snapshot of a superspreading event: one person unknowingly infected with COVID-19 transmitted the contagion to 23 other passengers scattered on a tour bus, even those sitting seven rows behind.

The image presented in last month’s study of what happened on a sunny, breezy day in eastern China is dramatic, experts say.

For those who have been studying how the public has responded to messages from authorities during the pandemic, it’s the kind of story that public health officials should harness more often in their communications.

“They tell a very compelling story,” said Prof. Kim Lavoie, who holds the Canada Research Chair in behavioural medicine at the University of Quebec at Montreal. “If you can represent that visually, people get it. People see the good things that happen when I adhere to these policies and the not-so-good things that happen.”

The Chinese study documented what happened in late January during the peak Lunar New Year travel season. The novel coronavirus was spreading in China’s Hubei province when a group of 126 Buddhists living in the community took two buses to a temple ceremony in Ningbo, hundreds of kilometres east of the city of Wuhan, the original epicentre of the coronavirus.

A woman who had recently dined with friends in Hubei rode on one bus. The presumed index case started to have a cough, chills and muscle aches after returning from the temple. She sat, unmasked, for the 100-minute round trip on a vehicle with cooling units recirculating the air. Two windows on each side of the bus were open.

The close, crowded conditions on a bus for a long period with someone who was likely highly contagious — with most of the 68 passengers and driver not wearing masks — suggested “airborne transmission likely contributed to the high attack rate,” the researchers wrote.

The Public Health Agency of Canada said it does not have a definition of superspreading events for this country and instead monitors outbreaks.

Several local medical officers of health across the country also don’t refer to superspreaders. For example, Dr. Elizabeth Richardson, Hamilton’s medical officer of health, was asked Tuesday if the city’s largest current outbreak at a spin studio — one of the worst fitness studio outbreaks in the country — would be considered a superspreader event.

Richardson said the public health department generally doesn’t use that term, instead calling it a “very large outbreak” with a lot of transmission.

Nonetheless, Dr. Kieran Moore, the medical officer of health for Kingston, Ont., and surrounding communities, said that during an outbreak at a nail salon in June that led to 37 cases, a “superspreading event contributed to 38 per cent of total cases.”

Successful public health measures during COVID-19 can also be used to tell a story and illustrate cause and effect for the public, Lavoie said.

The collective sacrifices of individual Canadians succeeded in bending the curve when only essential workers ventured out, cases dropped and then the effective reproductive number fell below one, pausing the disease’s exponential growth during the summer. Australia’s more recent success is another positive example.

To keep people engaged with public health measures over time, Lavoie suggests that governments in Canada share more personally relevant information to help individuals make informed decisions, rather than what she called a “pretty please” approach.

“I think ‘pretty please’ without supporting data is not very compelling, particularly when you’re asking people to make massive sacrifices without demonstrating that the sacrifices are worth it.”

Early on, Dr. Bonnie Henry, British Columbia’s provincial health officer, was praised for clearly showing people what was happening and why, in easy-to-understand terms.

“I honestly believe that had a huge impact,” Lavoie said. “It felt like ‘We respect you, we trust you with the information, and now that you have it, we have confidence you’ll make the right decision.'”

What’s more, when missteps were made initially, such as outbreaks in B.C.’s long-term care homes, Henry took full responsibility, she said.

What motivates people to sacrifice?

Behavioural medicine also suggests that moving away from a one-size-fits-all message to a more personalized approach would work better at motivating people to make important sacrifices.

Lavoie and Simon Bacon, a professor of health, kinesiology and applied physiology at Concordia University in Montreal, have been surveying people throughout the pandemic about what motivates them as part of the iCARE (International COVID-19 Awareness and Responses Evaluation Study) project.

The findings suggest that younger people might be more motivated by the socio-economic fallout of reimposing restrictions rather than risk to their individual health from COVID-19, compared with people over the age of 65.

“I think we do need to have positive messaging,” Lavoie said.

A common message from public health officials is: “We’re all going to get through this.” But to Lavoie, that doesn’t go far enough.

The field of finance also shows how communicating in terms of time, not case numbers, makes a difference in perception.

Daniela Sele, a PhD candidate at the Center for Law & Economics at ETH Zurich, turned from studying exponential growth in financial decision-making, like compound interest, to the exponential growth of infectious diseases like COVID-19.

Sele found that how numbers are presented matters in how people perceive them.

In a preprint study posted in August, Sele asked about 450 students to estimate how many cases could be avoided through interventions like physical distancing, handwashing and wearing a mask.

Sele and her co-author found people drastically underestimated how many cases could be avoided.

But if the same numbers were framed in terms of doubling time — how long it takes cases to double from, say, 100,000 to 200,000 — people assessed the benefits correctly.

“I think it’s interesting to think about could we talk about how long until the health-care system capacity is reached in our local community?” Sele said. “Because people, according to our data, seem to understand that better than the actual pace of the pandemic.”

WATCH | The role of superspreading events in COVID-19 transmission: 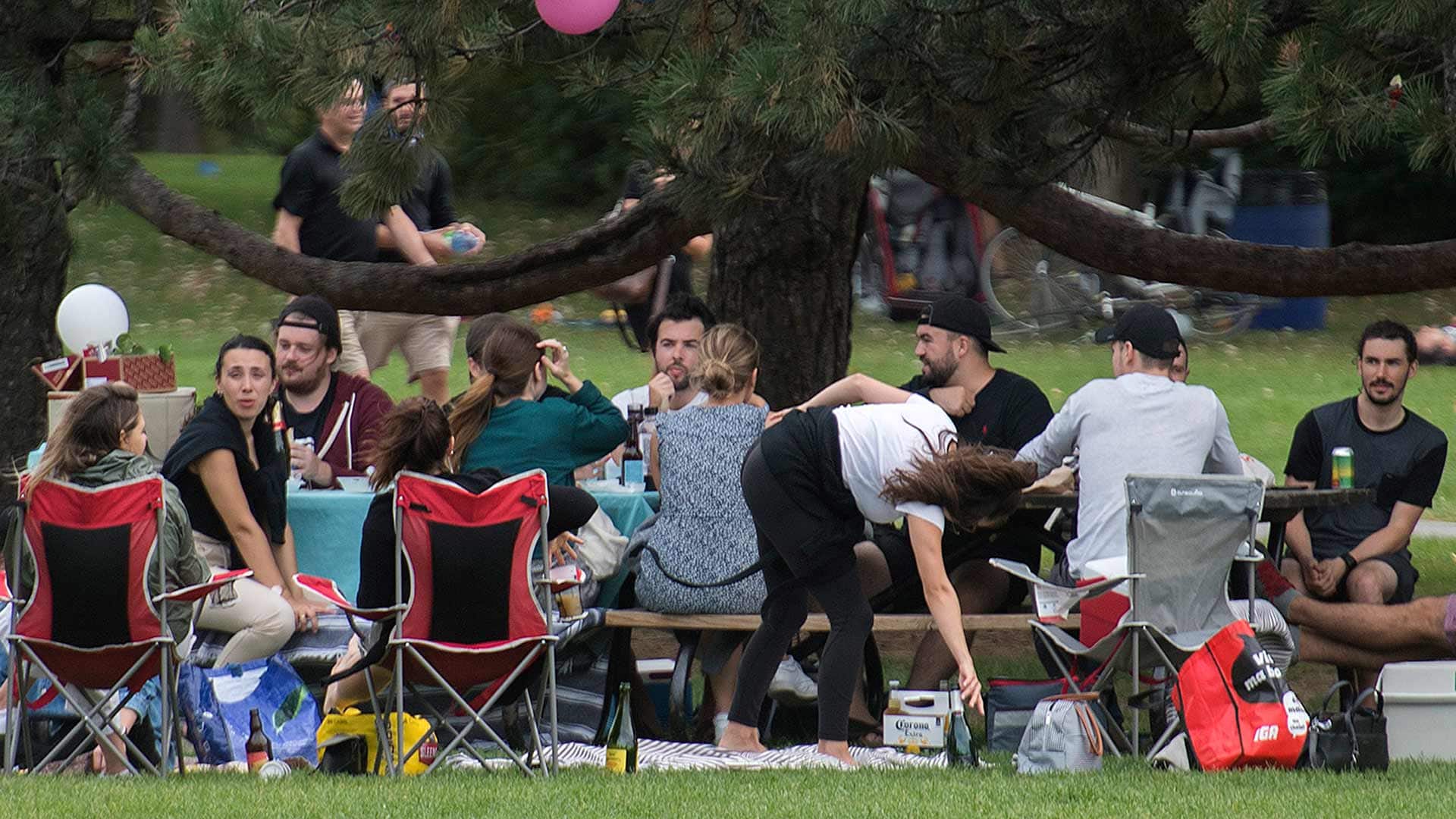 More research into how COVID-19 is spread shows that because not everyone sheds the same amount of virus, many infections are spread by a few people known as superspreaders. 2:01

Ashleigh Tuite, an infectious disease epidemiologist and mathematical modeller at the University of Toronto’s Dalla Lana School of Public Health, said when it comes to superspreading events like the tour bus in China, a small proportion of people are responsible for a greater share of the transmission.

“You don’t know ahead of time what will result in a superspreading event,” Tuite said.

The message? Like the woman who boarded a tour bus, it’s impossible to know if your silent infection will affect many others, so everyone needs to heed public health precautions.

It’s a combination of biology, such as being at the peak of infectiousness, and performing an activity in a location that’s really conducive to transmission — think indoor, crowded places — that come together to create superspreading events, Tuite said.