In 1971, Nancy Guri Duncan was working as a freelance journalist in south-east Asia. “I’m from the US, but I was in Vietnam covering the war,” she says. “That summer, I went to Chennai (then known as Madras) in India to meet a friend from the US. We travelled together to Kolkata (then Calcutta) and arrived at a Salvation Army guesthouse.” They were told to wait in the breakfast area while their room was being prepared. A few minutes later, François Le Diascorn joined them at their table with another young Frenchman. “At the time, we were trying to start our careers as war photographers,” he says. “We’d come to India because we were interested in investigating the conflict on the Indian-Pakistani border.”

That evening, Nancy and François talked about their careers and future plans. “I was smitten that night,” she admits. “François seemed like the sort of person I could be with.” However, he and his friend were leaving the following day to travel to the border. “I was really upset, but my friend told me to get his name and address. It wasn’t much to go on.” François also liked Nancy, but thought it was an “impossible” situation. “She was American, I was French and we were both going to be in different places. I didn’t see how it could work.”

He left the next day, but didn’t get far. The two men were forced to return to the Kolkata guesthouse when they realised their mission was too dangerous. “My friend told me she’d spotted the Frenchmen again, so we rushed down to the dining room,” Nancy says. “We were able to spend a few days together.” She had committed to taking her friend to Kathmandu in Nepal, but said she would be back in a couple of weeks to see François.

Nancy is photographed by François while interviewing the Dalai Lama in 1981. Photograph: F Le Diascorn

In the event, he did not have to wait that long. “I don’t remember why, but my friend ran out of money to stay in Kolkata,” he says. “I knew I wanted to see Nancy again, so we hitchhiked to Kathmandu and I went from hotel to hotel trying to find her.” He searched for days before eventually hiking up to a temple overlooking the city. “François spotted us on our bikes below and he raced down to find us,” says Nancy. “The moment he came to find me, we both knew this was it.”

The couple spent the next few months travelling in Asia before she moved to Singapore where her journalism work was based, and François went back to France. Before they separated, they had the “incredible experience” of interviewing and photographing the Dalai Lama together.

In the spring of 1972, Nancy moved to Paris so they could be together. After a brief stint in the US, they decided to make France their permanent home. They married at the city hall in Montmartre seven years later, followed by a picnic on the Seine. “We lived in Paris for more than 40 years before moving to our cottage in the south four years ago,” she says. They spent much of their time travelling the world together, with Nancy continuing her work as a reporter and François pursuing his photography career. “Travelling with another person is a test to see if you are really in harmony with each other,” he says. Luckily, they both passed.

“We even managed to get a second interview with the Dalai Lama in 1981 and we stayed in the same guesthouse,” says Nancy. “We’ve had a lot of adventures together.” She loves her husband’s sense of humour. “From the moment I watched him leave Kolkata the first time, I knew he was someone I could share a life with. He is such a good companion.” She has always supported François’ work, and helps wherever she can. “Nancy would always point out interesting things when we travelled,” he says. “She’s positive, determined and courageous. And she has the same lovely blond hair she did when we first met.”

“We never wanted money, just adventure,” Nancy says. “I am so lucky that he came to find me that day in Kathmandu.”

• Want to share your story? Tell us a little about you, your partner and how you got together by filling in the form here.

'We’re so keen to reopen': how one primary school is preparing to welcome back pupils | All together

Mon Sep 7 , 2020
Share on Facebook Tweet it Share on Google Pin it Share it Email Pin it Cassie Buchanan, headteacher of Charles Dickens primary in Southwark, south London. Photograph: Amit Lennon/GuardianAs September approaches, that familiar back-to-school feeling is in the air again – only this year it feels different. While children, teachers […] 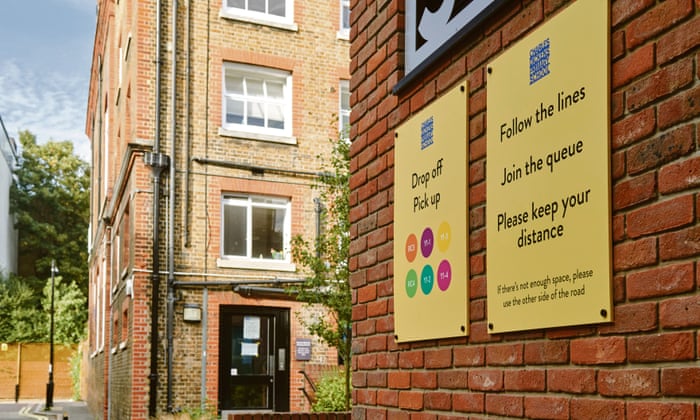