During her remarks on how the pandemic is shifting Liberal fiscal policy Wednesday, Finance Minister Chrystia Freeland acknowledged that her words might sound scary to some Canadians — particularly those of a certain age.

“Now, for Canadians of a certain vintage — and I freely admit to being one of them — the idea of increasing government debt holds particular terrors,” Freeland said, pointing to the fiscal turmoil of the mid-1990s that defined the political debate on fiscal policy in Canada for nearly a quarter century.

“But it is a poor general who fights the last war,” she continued. “And the reality is that, today, the prevailing global economic environment is changed entirely.”

At some point over the next six weeks, Freeland will table a fiscal and economic update that might include an updated tally of how much the pandemic and federal emergency measures have cost to date — and an estimate of how much the Liberal government proposes to spend in the years ahead as part of its plan to “build back better.”

The potential for sticker shock looms and the deficit hawks are already circling. So Freeland is getting an early start on making the case for spending — and for not worrying too much about the debt.

The case for ‘more, not less’

Freeland insisted Wednesday that the Liberal government’s approach is not based solely on “heart” — on concern for vulnerable Canadians — but is also grounded in “prudent, dispassionate economic calculus.”

For however long the pandemic is with us, she said, the federal government has to support Canadian citizens and businesses — because it’s the “compassionate” thing to do and it’s also the “pragmatic” thing to do.

“Our eventual recovery will be faster and more complete in direct proportion to how much we limit the economic scarring caused by the coronavirus recession,” she said.

But “limiting the damage” won’t be enough, she said. To ensure the recovery is “as broad, robust and complete as possible,” there will also be a need for “targeted, carefully thought-out investment on a meaningful scale.”

How meaningful? The pandemic recession, Freeland said, has been worse than the Great Recession of 2008 — so “it stands to reason we will need to invest more, not less.”

That at least offers a point of reference: the former Conservative government announced $30 billion in stimulus spending — equal to approximately two per cent of GDP — in the budget it introduced in January 2009.

Freeland acknowledged that “Canadians are careful about the nation’s finances” and said Canadians have asked her whether we can afford it. Unsurprisingly, Freeland answers this question in the affirmative.

In her first major speech as finance minister, Freeland laid out several reasons for saying so.

Before the pandemic, for instance, Canada had the lowest debt-to-GDP ratio in the G7; Freeland said she expects it will come out of the emergency in the same position. Interest rates are at historic lows and the government’s borrowing costs are currently at their lowest level in a century.

In 1995 — when Jean Chretien’s government decided to cut spending dramatically to balance the budget and appease international bond markets — the cost of servicing the debt was six per cent of GDP. Right now, it’s 0.9 per cent of GDP.

“Not one of the factors that drove the fiscal crisis of the 1990s holds true today,” she said.

Economic growth is more likely to outpace interest rates moving forward. Deflation and sub-par growth are bigger threats now — there is now a greater risk of doing too little than of doing too much. Major Canadian banks and the International Monetary Fund are coming down on the side of more spending.

All that said, Freeland also insisted that she is “not among those who think Canada should have a fling with Modern Monetary Theory” — the hip school of thought that proposes a particularly cavalier approach to government spending.

“Our fiscally expansive approach to fighting the coronavirus cannot and will not be infinite,” she said.

Freeland’s speech is the start of a debate.

Conservative leader Erin O’Toole has said already that any government led by him might need a decade to balance the budget. 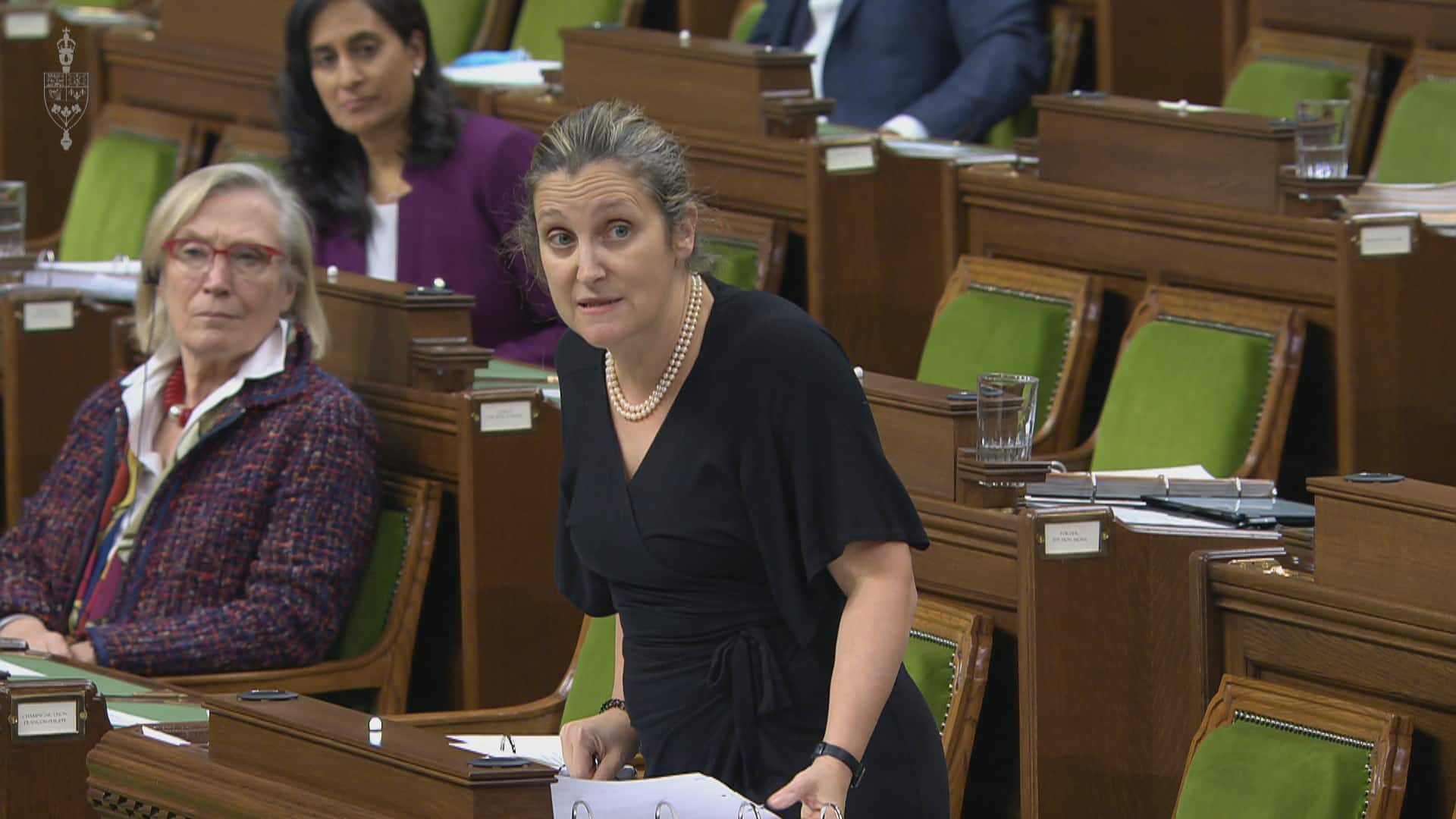 But there have been grumbles. Recently, for instance, Conservative finance critic Pierre Poilievre (who was just 16 years old in 1995 and holds the late Margaret Thatcher in high regard) made sure to note a report that estimated Canada’s federal deficit will be proportionally higher this year than the deficits run by other major economies.

That same IMF report showed that Canada went into this year with one of the smallest deficits among its peers (only Germany was in surplus) and that this country is still projected to run smaller deficits going forward than Boris Johnson’s Britain. But Poilievre’s lament is no doubt just a hint of what is to come once the Liberal government starts attaching numbers to its plans.

Freeland can marshal arguments and figures to make a theoretical case in support of what the Liberals have done and would like to do — and she can hope that the experts and commentators who side with her outnumber those who see reasons to worry. But the next argument about spending will, of course, still be as much about politics and psychology as it is about math.

Even if O’Toole doesn’t propose a quick return to balance, presumably he’s going to end up proposing to spend less than the Liberals would. The more interesting discussion is always about what governments should spend on and how — but that inevitably will compete now with the arguments over how much.

That debate will be, in part, about whether the Conservatives can make the case that the Liberals are being reckless, either in theory or in practice. And it will be about whether Canadians can accept the argument that it’s not 1995 anymore.

For 25 years, Canadians have been told that fiscal cleanliness is next to godliness — that government budgets are like household budgets, where spending more than you take in almost always ends badly.

It was never really that simple. But simple answers are comforting and it’s not always easy to abandon them.

Thu Oct 29 , 2020
Share on Facebook Tweet it Share on Google Pin it Share it Email The future of the Trans Mountain pipeline expansion project is once again being called into question — this time by a new report that argues the mix of competing pipelines, changes in energy demand and shifts in […]