Sort of live, from a COVID-ridden New York, it’s … a sobering reminder that the pandemic isn’t over.

Instead, the show announced – hours before airtime – that there would be no in-studio audience. It also sent home most cast members, crew, planned special guests and Charli XCX as the latest variant of the coronavirus spread.

What was supposed to be a busy, joyful night of comedy quickly became an unsettling jolt of reality: Not only is the pandemic not over, but there’s a creeping feeling that things seem to be regressing. As the omicron variant of COVID-19 causes massive spikes in cases, Broadway productions, NBA games and restaurants are shutting down; stars, athletes and politicians are revealing positive test results in staggering numbers; and Dr. Anthony Fauci, the nation’s leading infectious diseases expert, is warning that the variant is “raging through the world” and could replace the highly transmissible delta variant as the dominant strain.

Through its 46-year history, “SNL” has sometimes served as a barometer for the crises the U.S. endures. A few weeks after 9/11, the show returned with executive producer Lorne Michaels asking then-Mayor Rudy Guiliani if it was OK to be funny. (Giuliani famously replied, “Why start now?”) The first episode after the 2013 Sandy Hook shooting featured a children’s choir singing “Silent Night.” Cecily Strong opened a November 2015 episode with a solemn monologue after the Paris terrorist attacks that killed at least 129 people.

So watching the show open not with a goofy cold-open sketch but with Tom Hanks addressing the unique circumstances before introducing Rudd reminded us of the bleak circumstances. Longtime cast member Kenan Thompson and former head writer and “Update” anchor Tina Fey explained they would rely on a mix of sketches filmed earlier in the week and clips of old favorites. In place of more in-studio surprise guest appearances, Steve Martin and Martin Short appeared virtually to congratulate Rudd on joining the show’s five-timers’ club. 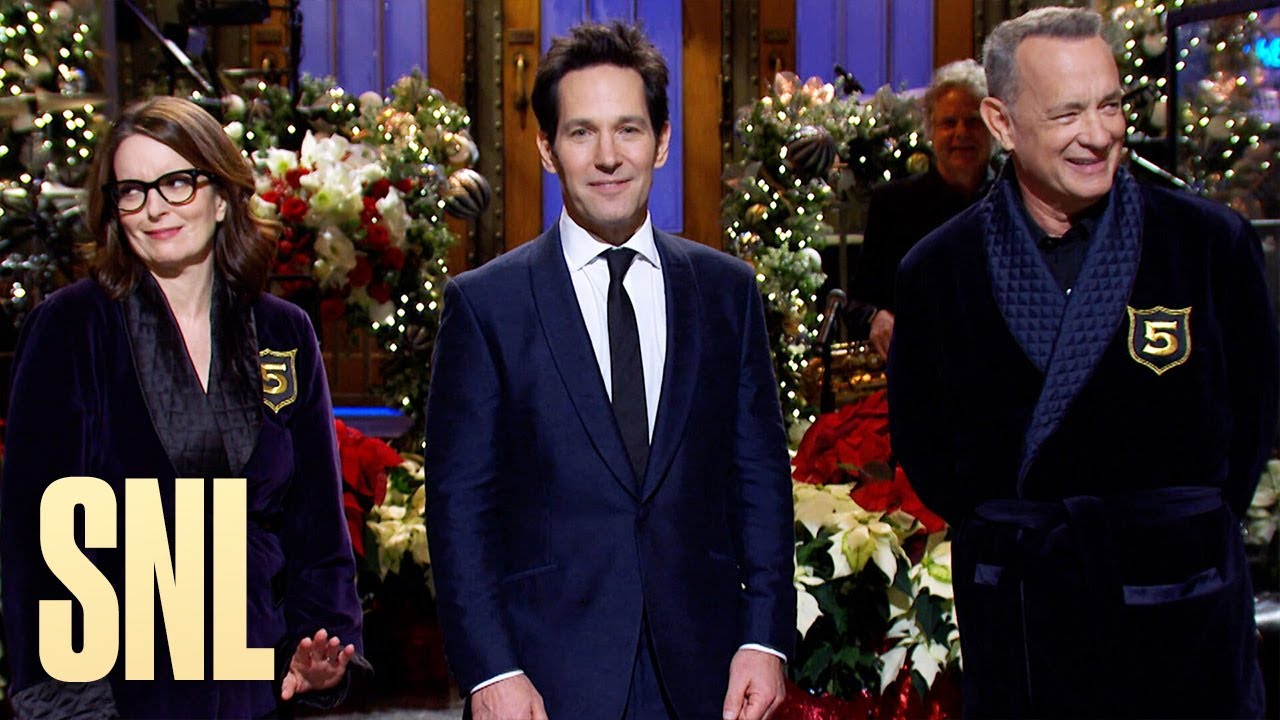 Last April, Hanks (who Fey joked “started COVID”) served as the host of “Saturday Night Live At Home,” the first remote episode in which cast members taped rough sketches via video chat. A year and a half ago, before vaccines helped the world reopen and return to some semblance of normal life, the scrappy virtual episode was a fun workaround that still offered topical new content.

All this time and progress later, regressing to a bare-bones production feels like foreshadowing a return to a time we’ve already endured and have no desire to return.

“SNL” isn’t to blame for choosing safety precautions over putting on a regular show. But the awkward attempt at reinventing its rarely-disrupted formula felt like an unwelcome indicator that all is not well.

“Thank you for coming. I’m extremely disappointed,” Rudd said to Hanks and Fey on Saturday night. He was talking about the letdown of his five-timers club induction. He may as well have been voicing frustrations from viewers at home about what this could mean for the state of the world, too.