When Dr. Shelly Sarwal decided she wanted a medically assisted death, she knew that she also wanted to donate her organs. It would make her the first patient in Nova Scotia and one of the first in Canada to do so, which was fitting for Sarwal.

“I spent my life trying to help people. I [saw I] could save five, six, seven lives. It [was] hard for me to say no to that,” she said.

The Halifax physician also had a passion for education and making health care better. And in her death, she spied a teaching moment.

“Shelly wanted to be a pioneer,” says Ken Lotherington, senior program manager of deceased donation and transplantation at Canadian Blood Services. “Shelly was a patient partner in this. She wanted to help educate people.” 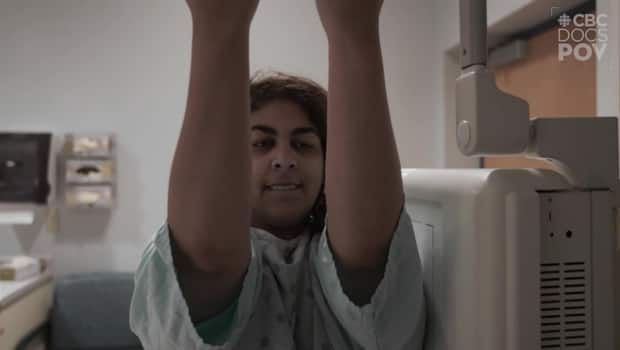 As Shelly’s disease progresses and she comes closer to ending her life, she reflects on what the questions should be now from the medical community. Less focus on her pain, and more on her happiness. 0:41

The CBC Docs POV film Her Last Project follows Sarwal as she organizes her medically assisted death and organ donation while also seeking to make the process easier for other living donors.

In her mid-40s, Sarwal was diagnosed with multiple system atrophy, a rare neurological disease with no cure. Outwardly, Sarwal appeared healthy. She laughed. She joked. She loved ice cream.

But she was also fiercely independent and was slowly losing that independence. She needed a wheelchair to get around outside and help from her husband to move around inside. She was also finding it harder and harder to swallow food, which raised the prospect of one day having to be fed through a tube — an idea she found unacceptable.

For Canadian Blood Services, putting together medical assistance in dying (MAID) and organ donation was uncharted territory. There were ethical issues and patient needs to consider, as well as the impact on health-care providers. So to develop new guidelines, the organization worked with Sarwal as a patient partner.

“Shelly wanted to tell her story, and we embraced it,” says Amber Appleby, director of organ and tissue donation and transplantation, which coordinates organ donation between the provinces.

While Sarwal was the first in her home province to donate her organs after undergoing the MAID process, she was by no means the only patient seeking to do so. A surprising number of MAID patients were inquiring about donation.

On the face of it, that should have simplified the whole process. How better to deal with the issue of organ donation consent than by dealing with living people?

“It should make organ donation easier, but somehow, it complicates it,” says Appleby.

And that’s why Sarwal’s input was so important. When she approached them about using her own situation as a template to work through questions, Canadian Blood Services quickly agreed.

“I’m committed to the organ donation bit,” said Sarwal. “I’ll be the pioneer and figure out how to make it better for the next patient so that I won’t be the only one.”

Impact on patient and health-care teams

There are important differences between someone signing an organ donation card and a MAID patient consenting to donate. Ultimately for MAID patients, it means having a different death than they might have imagined.

“A person can now no longer die at home if they want to be able to donate their organs. That’s a big matter,” says Lotherington.

MAID patients must agree to a hospital death so that their body can be transferred to the organ donation team with little delay. For friends and family, that means less time to grieve and mourn their loved one after their death.

In the months before their death, MAID patients also have to travel to the hospital for a variety of tests. There are blood tests for infectious diseases, EEGs, X-rays and tests to assess the viability of the organs, says Lotherington.

This is no small issue. By virtue of their conditions, many MAID patients already suffer discomfort and may have limited mobility or energy, he says.

Another difference between the traditional process and working with a living donor is the impact on health-care providers.

Organs typically come from people who have suffered, in technical terms, circulatory death or a neurological determination of death. Everything that could have been done to save the patient has been done, and after the patient dies, organ donation consent is received and the organ donation team is contacted.

But when health-care teams have to enter the patient’s house, sit down with them at the kitchen table and set up schedules for further testing, relationships and bonds are formed.

Slowly, a pathway is being charted with these differences in mind. Canadian Blood Services, in partnership with other organizations, published guidelines in 2019 and wrinkles are being worked out. Hospitals are now trying to find ways to offer a more comfortable, homey environment for MAID patients and their friends and families.

This is an epic adventure, 11 women canoeing for 40 days in the wilds of Canada | Travel