It’s official — Saskatchewan’s election is underway and politicians will be hitting the campaign trail, keeping COVID-19 restrictions and precautions in mind.

The leader of the Saskatchewan Party, Scott Moe, met with Lt.-Gov. Russ Mirasty Tuesday morning and asked him to dissolve the legislative assembly in order for the province’s 29th election to begin. The province will go to the polls on Oct. 26.

He then launched his campaign just before noon at the Regina campaign office, repeating a question sure to be heard throughout the next 28 days: “Who do you trust to lead Saskatchewan’s economic recovery?”

Moe touted his party’s track record, highlighting job creation, population growth and new schools and hospitals. He also pointed to the past, saying that when the NDP was in power prior to 2007 it had a “dismal” track record of keeping facilities open and retaining people in the province.

Moe also said his party had led the province to reopen safely amid the COVID-19 pandemic. As of Tuesday, the province has seen 1,899 reported cases of COVID-19. There are currently just 138 active cases.

Saskatchewan Party politicians have said they want to balance the budget by 2024. The government recently projected a $2.1-billion deficit for 2020-21.

NDP Leader Ryan Meili, meanwhile, dug into this plan when he kicked off his campaign at the legislature  — asking how voters could trust a politician who “didn’t even know we were in a recession.”

The province has been in economic decline since before the pandemic, and Meili warned that a vote for the Saskatchewan Party means four years of “austerity on steroids.”

“We’ve seen this austerity playbook before,” he said, citing cuts to health and education, the attempted sell-offs of SaskTel and the Crown insurance company SGI, and the closure of the provincial bus service.

Meili repeated promises already laid out by the NDP: to bring in affordable child care, an increased minimum wage and smaller class sizes.

Moe has accused Meili of wanting to spend recklessly and suggested that would lead to cuts down the road. The Saskatchewan Party has run ads saying the province can’t afford Meili’s NDP, but today Meili shot back. Scott Moe arrives at Government House in Regina and is greeted by Lt.-Gov. Russ Mirasty. 0:58

“We’re saying loud and clear: you don’t have to settle for the Scott Moe status quo,” Meili said.

Both party leaders promised a better future for families, but neither released fine details about how they would achieve that. They say that information will be released in the days to come.

This will be the third provincial election since the pandemic started, following New Brunswick and British Columbia, which will head to the polls two days before Saskatchewan.

Voters will be asked to choose members of the legislative assembly to represent 61 constituencies across the province. Moe suggested every constituency was a battleground, but said the party would be making a strong effort in about half of the constituencies. They would only need 31 seats to form a majority government. 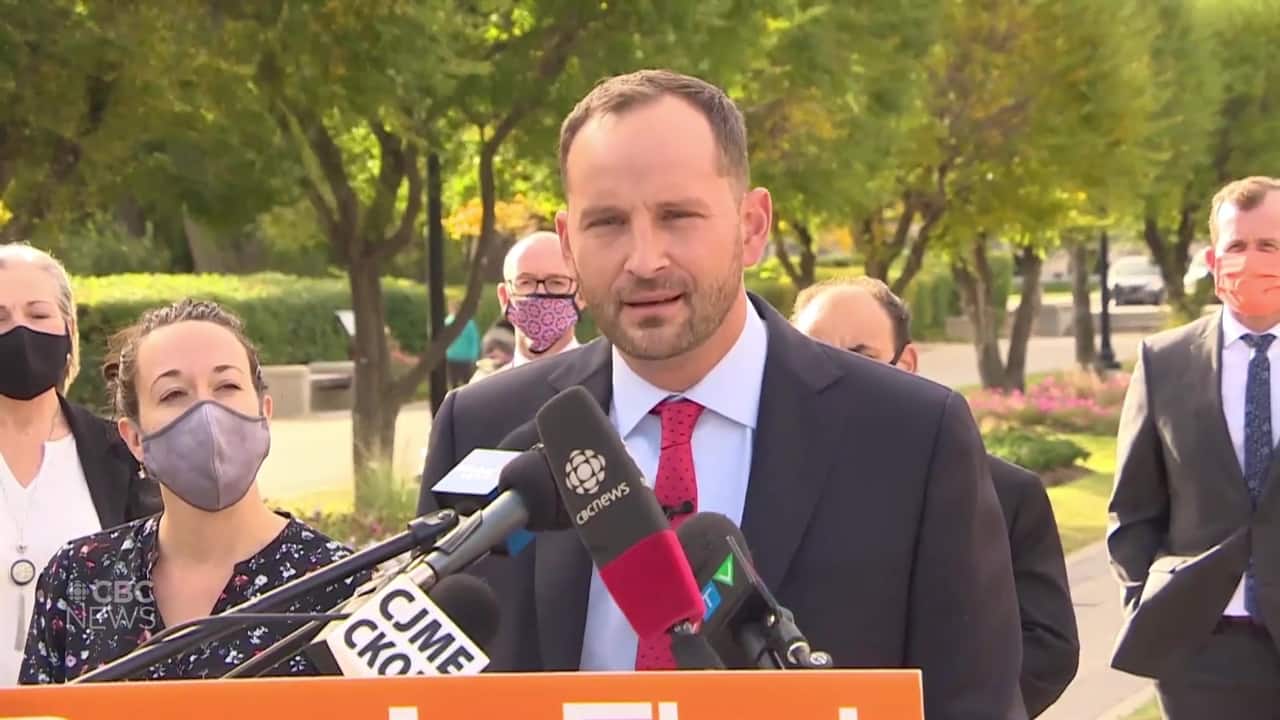 Sask. NDP Leader Ryan Meili promises to invest in people and stand against what he says are Sask. Party cuts to health care and education. 0:35

At the time of dissolution, the Saskatchewan Party held 46 seats in the legislature, and the NDP held 13. The remaining two seats were vacant.

A first-past-the-post system is used for Saskatchewan elections, which means each voter is allowed to cast one vote for one of the candidates in their constituency. The candidate with the most votes wins.

Voters can register to vote by mail, or they can vote in person at physically distanced polls, either in advance or on election day. People who want to vote by mail must register by Oct. 15.

While Moe’s election call marks the start of the official campaign race, there has already been a flurry of pre-election activity with door-knocking, ads, mailers and a heavy reliance on social media posts.

Meili, whose party held Official Opposition status when the legislature was dissolved, has made several pre-election promises in recent weeks.

Moe, whose Saskatchewan Party is seeking a fourth consecutive term this year, was also busy travelling around the province for more than two weeks to announce future school and municipality projects. He has denied that these were pre-election photo-ops or that he used taxpayer-funded government communications to campaign.

A recent survey found the Saskatchewan Party had a strong lead among respondents.

In a survey conducted from Sept. 1 to 3 by the University of Saskatchewan’s Canadian Hub for Applied and Social Research, in partnership with PostMedia News and CBC Saskatchewan, 29 per cent of the representative sample of 400 people said they intended to vote for the Saskatchewan Party, compared to 14 per cent for the NDP.

At that point, more than a third of respondents stated they didn’t know who they would vote for if a provincial election were held mid-September.

CBC Saskatchewan will be home for all your election coverage on Oct. 26.

Live election coverage, which will be hosted by CBC’s Sam Maciag, will begin at 7:30 p.m. CST.

Watch on TV: Live on CBC Television beginning at 7:30 p.m. CST (check your TV service provider for channel). The program will be available on CBC News Network beginning at 8 p.m. CST.

Follow and join the conversation on social media by using #skvotes.