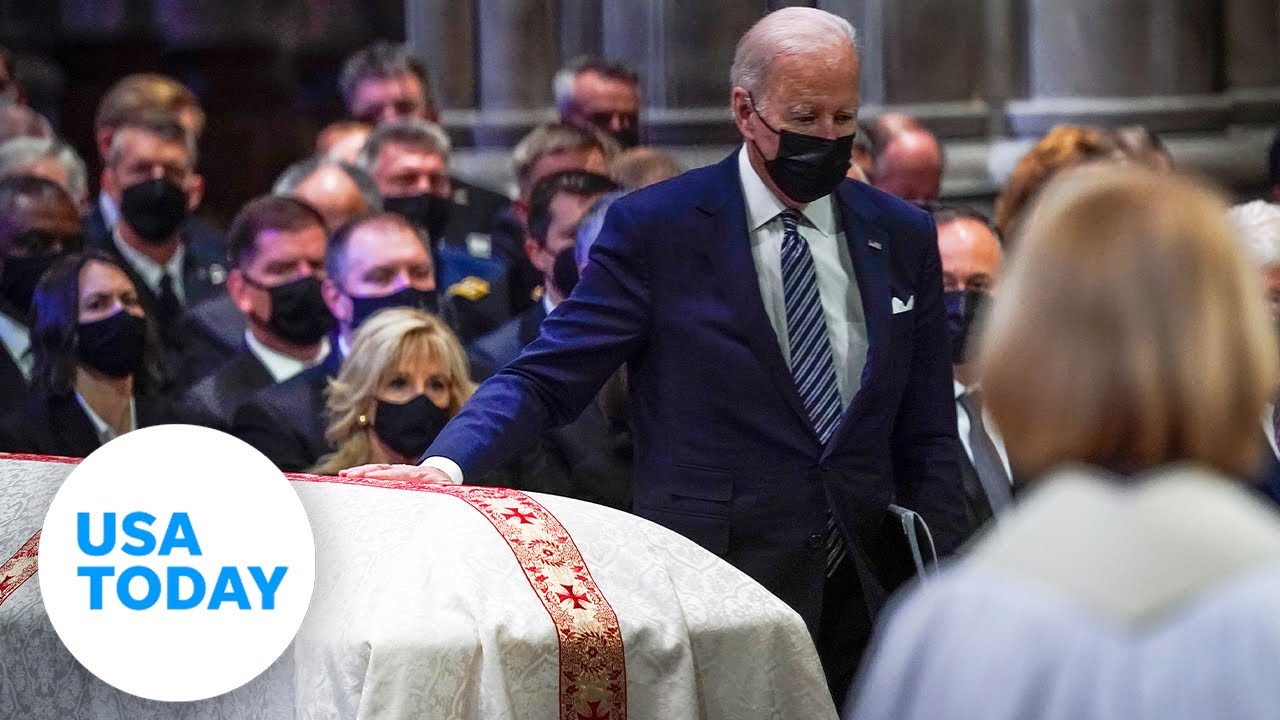 WASHINGTON – Family, friends and members of Congress are paying tribute to Bob Dole at his funeral at the Washington National Cathedral on Friday, a day after President Joe Biden and congressional leaders honored the Senate’s longest-serving Republican leader as he lay in state at the U.S. Capitol.

Dole’s casket was loaded onto a hearse at the Capitol and taken to the cathedral, where a private service started shortly after 11 a.m. EST.

Gen. Mark Milley, chairman of the Joint Chiefs of Staff, will also speak, along with friends of the Dole family, actor Tom Hanks and Savannah Guthrie of NBC News. Dole’s widow, Elizabeth, will lay a wreath at the memorial.

Following the church service, around 1:15 p.m. EST, Dole’s motorcade and casket will drive to the National World War II Memorial on the National Mall and stop there to honor the life and service of the World War II veteran. Dole helped build the memorial as national chairman of its fundraising effort.

Former Sen. Tom Daschle, who in the mid-1990s served as the Democratic majority leader while Dole was leading the Senate Republicans, praised the Kansan for possessing a love of country that transcended partisan politics.

Dole said the agricultural community was particularly pleased when senators chose two Midwesterners to lead their respective parties in the chamber.

“He said every farmer in America that very moment ordered a new tractor,” he said, drawing a chuckle from the congregation.

“There are two kinds of education in this world,” Dole said. “There’s one where you give yourself and another you get from others. You could get an education on the farm, or in a factory or in a science lab, at a church pew. Most of all, if you’re from Russell, you can get an education just by looking at life around you.”

Roberts said when he learned the news of Dole’s death on Sunday, Kansans from all walks of life “paused,” including himself.

“Bob Dole was a person who meant something to everyone in the coffee shop, the campaign trail, the halls of Congress,” he said. “Whether we were in Topeka, Abilene, Wichita or Dodge City, I saw Bob Dole connect with Kansans, always on a personal level. He would share with them this vision, this promise, and he would help them achieve it.”

‘And there was Bob’

Roberts also spoke on Dole’s dedication to American veterans, particularly in his persistence to the creation of the World War II memorial.

“Every weekend, when the Honor Flights would roll up to the World War II memorial, Kansas veterans, escorted by Kansas high school students, would visit their memorial to reflect on their fight to preserve a free world,” he said. “And there was Bob, shaking every hand, posing for every picture, listening to all the stories and the thanks of a still grateful nation.”

Biden: Dole was ‘a man of principle, pragmatism and enormous integrity’

President Joe Biden honored Bob Dole Friday morning, calling the late senator a “genuine hero” as he described his life as a war hero and a politician who “always did his duty” and “lived by a code of honor.”

“I found Bob to be a man of principle, pragmatism and enormous integrity,” Biden said of the former GOP leader. “He wanted government to work, to work for folks like him, who came up the hard way.”

Biden, who served with Dole in the Senate, noted that the Kansas Republican at times made decisions that were in opposition of those within his own party, such as creating a federal holiday honoring Martin Luther King, Jr.

“Bob Dole did that,” Biden said, adding that the late Senator told colleagues that “No first class Democracy can treat people like second class citizens.”

During his closing remarks, Biden said Dole “will be with us always.”

“Bob will be with us always, cracking a joke, moving a bill, finding common ground,” Biden said.

Rev. Randolph Hollerith welcomed the mourners to the funeral, noting that it was only five weeks ago that former Secretary of State Colin Powell had his own memorial service in the very same church.

“We have indeed seen too much loss in recent days,” said Hollerith, dean of the Washington National Cathedral since 2016.

“Bob Dole was one of the greatest of the greatest generation, a patriot who always placed country above partisanship and politics. While we mourn his loss, we gather this morning to give thanks for him and to celebrate his extraordinary life,” the reverend said.

“Though Sen. Dole has gone from us he is not lost,” he said. “For now, it is enough to say on behalf of a grateful nation, well done, good and faithful servant. Well done.”

Pence wasn’t the only former vice president there. Dan Quayle and Dick Cheney were also in attendance.

A number of lawmakers will be at the funeral service for the former senator. Some members of Congress, such as Sens. Amy Klobuchar, D-Minn., and Susan Collins, R-Maine, were already in attendance at the Cathedral. Other lawmakers, as well as House Speaker Nancy Pelosi, D-Calif., House Minority Leader Kevin McCarthy, R-Calif., Senate Majority Leader Chuck Schumer, D-N.Y., and Minority Leader Mitch McConnell, R-Ky., will be arriving with the motorcade that left the Capitol.

President Joe Biden will also be in attendance and will deliver remarks honoring Dole.

The flag-draped casket carrying former Sen. Bob Dole has been loaded on a hearse and has left the Capitol for the six-mile trip to the Washington National Cathedral where a funeral service for the former GOP leader is scheduled to start at 11 a.m. EST.

The casket of the World War II veteran, who lay in state Thursday, was carried down the steps from the Capitol Rotunda by eight members of the military as congressional leaders looked on.

Dole’s widow, Elizabeth, and daughter, Robin, were part of the police escort taking the former presidential candidate to the funeral service.

A private service is scheduled at the cathedral where President Joe Biden and former Sens. Pat Roberts and Tom Daschle, and Dole’s daughter Robin Dole will give tribute. Lee Greenwood will perform.

Biden hails him as ‘man of principle’

Who was Demaryius Thomas? Everything to know about late wide receiver