We finally have a premiere date!

HBO Max has announced that “Sex and the City” reboot “And Just Like That …” will arrive with two episodes on Dec. 9. The next eight episodes will release every Thursday following the premiere.

The streaming platform shared the news Friday alongside the official trailer for the show. The 50-second teaser opens with a shot of Carrie Bradshaw (Sarah Jessica Parker), Miranda (Cynthia Nixon) and Charlotte (Kristin Davis) and jumps through scenes from the new series as Carrie voices words of wisdom.

“They say something things never change. But the truth is, life is full of surprises,” she says. “And as your story unfolds, the city reinvents itself. And just like that … a new chapter begins.”

Parker, 56, announced the reboot, in which she stars and executive produces along Nixon and Davis, in January with a teaser video on Instagram. “I couldn’t help but wonder … where are they now? X, SJ,” she wrote.

Ever since, fans have been excited to know more, and slowly but surely, details are rolling out. Here’s everything we know so far:

When will ‘And Just Like That …’ premiere? Where can I watch?

“And Just Like That …” premieres Dec. 9. The series will consist of 10 30-minute episodes and will stream on HBO Max. The eight remaining episodes will air on Thursdays. So far, the streaming service has only revealed plans for one season.

More:Sex and the City is getting a reboot — here’s how to watch it

To mark the start of production in July, HBO Max released a first-look photo of the girls back on the New York City streets.

The photo features Parker dressed in a whimsical gingham mid-skirt, Nixon strutting in off-white, wide-legged slacks and Davis rocking an off-the-shoulder blouse paired with a designer bag at her side.

“Got here to work way too early,” Parker captioned photos of the cast’s scripts, along with individually wrapped face masks. “Nerves all a wonderful jumble.”

Davis also shared Parker’s post on her Instagram Stories, adding that “it’s really a miracle to be back together and with the most remarkable additions to our cast!”

“I am so grateful to Sarah and #MaichaelPatrickKing for taking the creative leap of faith that made this happen,” she added.

Nixon posted an Instagram photo of the trio smiling in front of a New York cityscape, with the caption: “Friendship never goes out of style.”

During the 2021 Emmys, viewers got a peek at the show within an HBO Max trailer showcasing its upcoming releases. Around the 24-second mark, footage shows Carrie and Mr. Big getting cozy in the kitchen and kissing. 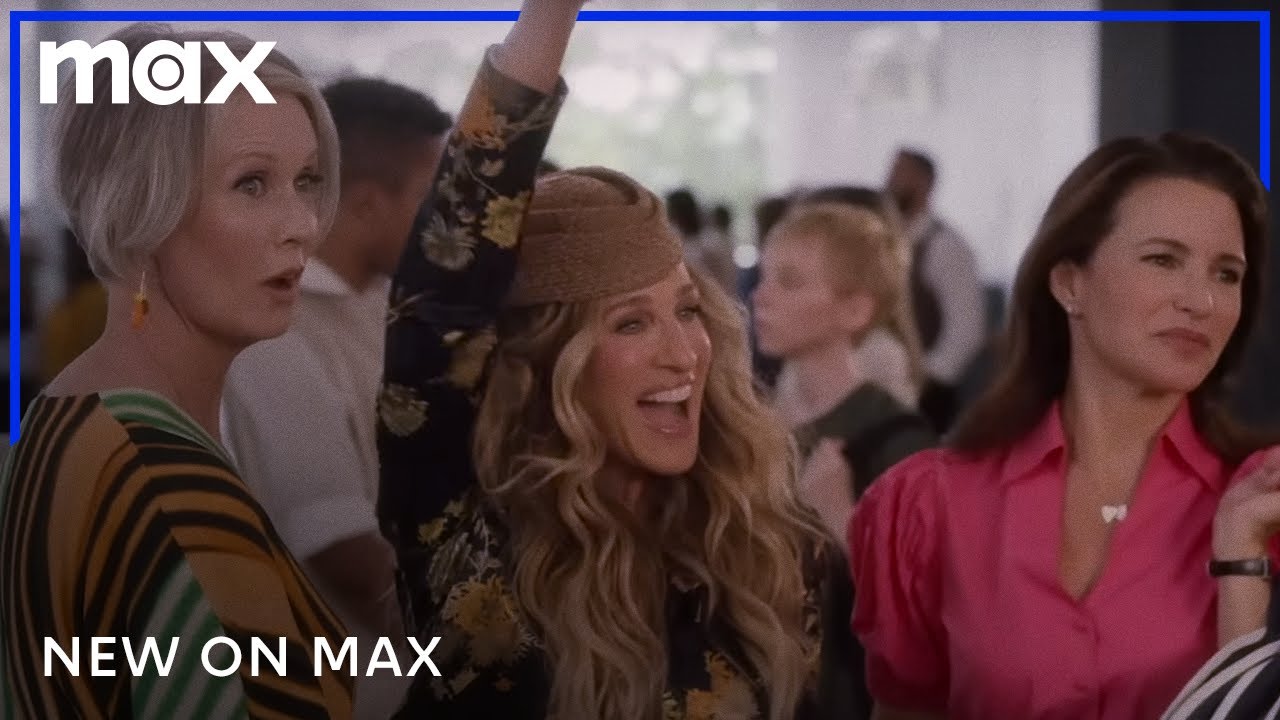 Which ‘Sex and the City’ cast members are coming back?

Parker, Nixon and Davis aren’t the only familiar faces signed onto the reboot.

Garson died Sept. 21 during the reboot’s production after battling pancreatic cancer. The show’s creator, Michael Patrick King, said in a statement to USA TODAY that Garson’s “spirit and his dedication to his craft was present every day filming ‘And Just Like That.’

“He was there – giving us his all – even while he was sick. His multitude of gifts as an actor and person will be missed by everyone,” King said.

Garson joked on Instagram during the casting announcement that news of he and his co-stars return was the “worst kept secret ever.” He added he’s “grateful beyond measure” to return. Cantone tweeted he’s “thrilled” to be back as well.

“This is very good news,” Handler quipped on Twitter, “because otherwise I don’t know why I’m sitting in #NYC, in 90 degree heat, with a man urinating between the trees in front of me.”

“Everyone at ‘And Just Like That…’ is thrilled to be able to continue the storylines of these beloved ‘Sex and the City’ characters with the actors who made them so lovable,” King said in a press release.

On May 26, the streaming giant announced the series’ love-to-hate character Mr. Big will also be back, with Noth reprising his role as John James Preston. (Remember, “Sex and the City 2” ended with Carrie and Big being married with a black diamond ring and living happily ever after.)

“How could we ever do a new chapter of the ‘Sex And The City’ story without our Mr. Big?” King said in a press release at the time.

Parker gave fans a sneak peek at the Carrie and Big romance on Instagram in August,  posting a photo of her and Noth in character.

“These 2. I bet they stay out late tonight,” she captioned the photo.

Noth posted his own photo of him and his on-screen lover with the caption: “Together again!”

What is the ‘Sex and the City’ reboot about?

As before, the series is based on the Candace Bushnell book “Sex and the City” and the influence of the original 1998-2004 HBO series created by Darren Star. But HBO Max chief content officer Casey Bloys told TV Line he’s “not trying to re-do Sex and the City.”

What happened to Samantha?

The original girl squad consisted of four career women: Carrie, a columnist obsessed with fashion, dating and relationships; Charlotte, an art dealer obsessed with the idea of marriage; Miranda, a Type-A lawyer; and Samantha, who was a public relations professional with an emphasis on relations. Samantha spent much of the series chasing sexual conquests and offering NSFW punchlines.

Cattrall played Samantha in the series and the two “Sex and the City” movies in 2008 and 2010, which received mixed reviews. But in a 2019 Mail Online interview, she vowed to “never” appear in another movie, squashing any hopes of her return to the franchise.

“Never. It’s a no from me,” the 64-year-old actress said at the time, implying her decision was rooted in her feud with former co-star Parker. “You learn lessons in life and my lesson is to do work with good people and try and make it fun,” she added.

Although Cattrall won’t be returning to the “Sex and the City” franchise, she is set to join the Peacock reboot of “Queer as Folk,” according to a press release. Cattrall will play a “a martini-soaked, high society southern debutant with trailer park roots” in a recurring guest role. Cattrall is also filming the “How I Met Your Mother” spinoff, “How I Met Your Father,” which stars Hilary Duff.

More:Kim Cattrall wants to ‘work with good people,’ shuts down ‘Sex and the City 3’ hopes

Fans commented on Parker’s Instagram post about a missing Samantha. One user @j.asminemartin explained in the comments: “they dislike each other.” Parker replied: “I’ve never said that. Never would. Samantha isnt (sic) part of this story. But she will always be part of us.” Another user, @sylviasalcedola, wrote that she “will miss Kim/Samantha.” Parker wrote back, “we will too. We loved her so.”

Cattrall’s conflict with Parker has unfolded on social media.

When Cattrall’s brother died in 2018, Parker sent condolences on Instagram. Cattrall followed up with a post that read “I don’t need your love or support at this tragic time @sarahjessicaparker.”

She added: “Your continuous reaching out is a painful reminder of how cruel you really were then and now.”

“Friendships fade, and new friendships start. So I think it is all very indicative of the real stages, the actual stages of life… They’re trying to tell an honest story about being a woman in her 50s in New York,” he told TV Line. “So it should all feel somewhat organic, and the friends that you have when you’re 30, you may not have when you’re 50.”

One “new friendship,” as Bloys put it, possibly blossoming on the reboot could involve Ramírez.

HBO Max announced a new reoccurring character is coming to the city: Che Diaz, a nonbinary podcast host played by Ramírez. Diaz uses them/they pronouns with a “big heart,” “outrageous sense of humor and progressive, human overview of gender roles,” according to the character description.

While the reboot follows older versions of the cosmopolitan ladies, it will also follow their all-grown-up children. In July, HBO announced Alexa Swinton, known for her role as Eva Rhoades on Showtime’s “Billions,” will portray Charlotte and Harry’s daughter Rose Goldenblatt.

Swinton celebrated the news by sharing a screenshot of a Deadline report about her casting on Instagram.

“….and just like that baby,” she wrote in the caption.

“And just like that… I’m crying YET AGAIN,” Ang wrote on Instagram. “Thank you to the @justlikethatmax family for taking me in, and giving Lily such a wonderful voice.”

What does author Candace Bushnell think of the reboot?

Bushnell told the New York Post in an interview published Oct. 16 that she’s not surprised HBO decided to bring back the show.

“HBO’s going to make money on it. They’re going to exploit it as much as they can,” Bushnell said, adding that she’ll definitely be watching it. “They rebooted ‘Gossip Girl.’ If they didn’t reboot ‘Sex in the City,’ it would be really strange.”

“The reality is, finding a guy is maybe not your best economic choice in the long term. Men can be very dangerous to women in a lot of different ways. We never talk about this, but that’s something that women need to think about: You can do a lot less . . . when you have to rely on a man,” she said.

Coronavirus: What’s happening in Canada and around the world on Saturday