That’s what a cleanup team recovered in a monthslong effort to chip away at the so-called Great Pacific Garbage Patch, a massive collection of marine debris plaguing the Pacific Ocean.

A half-mile long trash-trapping system named “Jenny” was sent out in late July to collect waste, pulling out many items that came from humans like toothbrushes, VHS tapes, golf balls, shoes and fishing gear.

Jenny made nine trash extractions over the 12-week cleanup phase, with one extraction netting nearly 20,000 pounds of debris by itself.

The mountain of recovered waste arrived in British Columbia, Canada, this month, with much of it set to be recycled.

News in your inbox:Sign up for the Daily Briefing newsletter

But this was not a one-off initiative. In fact, it was simply a testing phase. And the cleanup team is hoping it’s only the start of more to come: more equipment, more extractions and cleaner oceans.

Ramping up the cleanup

The catalyst behind the cleaning is The Ocean Cleanup, a nonprofit trying to rid the world’s oceans of plastic.

Boyan Slat, who founded the organization in 2013 at the age of 18, called the most recent testing phase a success, but said there’s still much to be done.

The 27-year-old from the Netherlands said the group can enter a new phase of cleanup after testing eased some scalability concerns and proved that the system could accomplish what it was designed to do: collect debris.

The testing phase was a step forward in completing the organization’s lofty set of goals. It hopes to deploy enough cleaning systems to reduce the size of the Great Pacific Garbage Patch by 50% every five years and to initiate a 90% reduction in floating ocean plastic by 2040.

From 2018:A giant floating trash collector will try to scoop up the Great Pacific Garbage Patch

Netting 63,000 pounds of trash is an eye-popping number, but it pales in comparison to the enormity of the patch, which covers an area twice the size of Texas or three times the size of France, according to The Ocean Cleanup.

The group estimates the inner part of patch contains more than 1.8 trillion pieces of plastic that amount to roughly 88,000 tons, though the National Oceanic and Atmospheric Administration cautions that it’s tough to make a true estimate on its size due to constantly changing borders and content.

The patch is fueled in part by a steady stream of trash and debris that flows from rivers into oceans. A peer-reviewed study published in 2017 estimated between 1.27 million and 2.66 million tons of plastic waste flows into oceans via rivers every year.

If it doesn’t wash right back onto shore, debris flowing in from rivers can be pushed by ocean currents and end up in the North Pacific Gyre, one of the world’s five major gyres and the glue that holds the Great Pacific Garbage Patch together.

That’s where Slat hopes build up a fleet of cleaning systems that can greatly reduce the size of the waste patch over time. 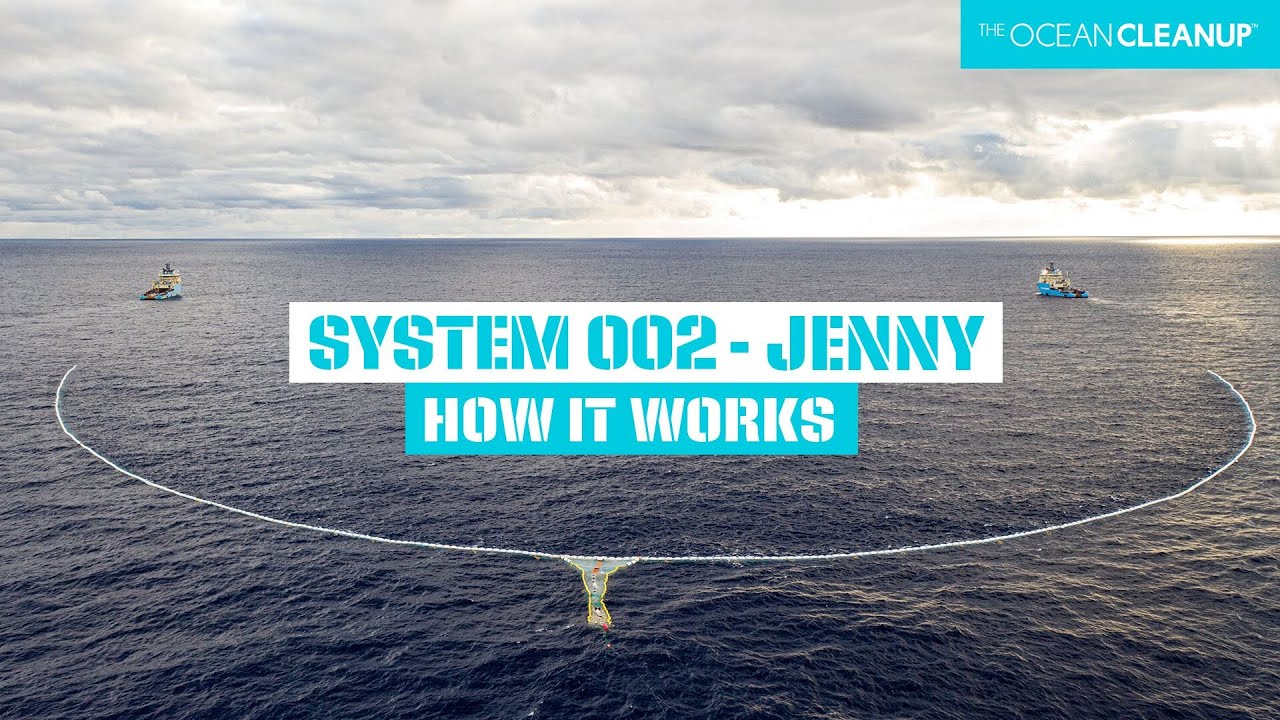 Slat said The Ocean Cleanup will shift its focus back to cleaning the patch on Friday, when Jenny, the prototype cleaning system, gets deployed back into the Pacific to collect anywhere from 22,000 to 33,000 pounds of waste every week.

While Jenny tackles the garbage patch, The Ocean Cleanup will work on a larger, full-scale cleaning system set to be released in summer 2022 that expects to be the blueprint for creating a fleet of systems.

Slat projects they will need 10 full-scale systems to clean the patch at a rate of just under 20,000 tons per year, which would put the group on par to reach its goal of reducing the mass by 50% in five years.

Reducing the existing patch is only one phase of the battle, though.

“We need to clean the legacy, but we also need to tackle the source,” Slat said.

The Ocean Cleanup plans to roll out new devices called “Interceptors” that aim to trap waste in rivers before they enter the ocean. The solar-powered contraptions, which closely resemble a boat, use a long barrier to direct waste towards a conveyor belt that drops all the debris into dumpsters.

Three “Interceptors” are already up and running in rivers around the world: one in Indonesia, one in Malaysia and one in the Dominican Republic. Another one, in Vietnam, is installed but it not yet operational, a spokesperson from The Ocean Cleanup said.

A man claimed he was related to Sitting Bull: Now, DNA proves he’s his great-grandson.

Where does all the waste go?

Getting trash out of the ocean is a herculean task in itself, but perhaps just as important is what to do with it once it’s on dry land.

The Ocean Cleanup says 95% of the plastic it collects can be recycled. The organization has already begun turning that plastic into products like sunglasses to be sold on its website. Slat said the group will soon pivot away from sunglasses and is in contact with brands to create other products.

For other objects like wood, glass and the remaining plastic that can’t be recycled, the group manages the waste in accordance with local legislations as it explores alternative recycling options, a group spokesperson said.

Turning ocean waste into products is one stream of income for the nonprofit, which will be relying heavily on funding as it looks towards scaling up its fleet of cleaning systems and taking aim at its sky-high goals.

“Honestly, we can go faster if the resources are available. It’s really just a question of money,” he said.

The Ocean Cleanup says it receives funding from philanthropic, commercial and governmental donations and sponsorships.

Funding is one of many hurdles that lie ahead for The Ocean Cleanup and for Slat, who embarked on this journey after he went on a scuba diving trip when he was 16 and saw “more plastic bags than fish.”

“Last week, seeing the plastic on the ship, seeing all these containers being offloaded, I know it’s still a long journey ahead, but … it was quite a relief,” Slat said.

“It’s within the realm of possibility for the first time since the invention of plastic that we can clean up the Great Pacific Garbage Patch.”

Ghost voices and floating heads: These are the most haunted places in the US