Age: Depending on the species, they can live to 70 years or more in captivity.

Like balloons? No, birds with brightly coloured plumage that never shut up.

Some of them can even be taught to swear. Yes they can.

I hear that, as pets go, they’re highly intelligent. Generally speaking, a parrot is about as smart as a three-year-old child, with similarly complex needs.

Having a parrot sounds fun! Yeah, you’d think so.

What possible downsides could there be to living with a large, noisy, demanding bird? A lot of people found out when they were trapped at home with their parrots during lockdown.

I can see if you’re working from home a loud parrot might make you anxious. Some owners evidently couldn’t take it any more. The rescue charity Birdline took in 88 birds between March and September, a 70% increase on the same period last year.

Interesting. Is there a rescue charity for annoying housemates, do you think? The Facebook group Lost Parrots & Birds Found has also seen a sharp increase in reports of missing parrots. It is believed that some of those reported birds had been intentionally freed by their owners.

Can’t they just train the parrots to be quiet? Not really. Parrots squawk for all sorts of reasons – boredom and hunger being the main ones – but they will not be silenced.

Well, at least the rescued birds can now be adopted by new owners with more patience. It’s not that simple.

Why not? Because parrots get heavily imprinted on their owners, to the extent that they develop strong gender preferences.

What does that mean? Some parrots don’t like women.

Is this for real? Yes. There are a number of them awaiting adoption on the site Problem Parrots. Buddy the blue-fronted Amazon, for example, “is a man’s bird and may bite females”.

This is an outrage. Bob the Senegal’s profile says: “I am looking for a home with a male as the main carer. I may also adapt to the women in the equation but again I should be watched because I am liable to bite the women.”

Wake up, Bob, you dinosaur. Unfortunately, not that many men are in the market to adopt birds.

It’s a big decision, electing to spend the next 70 years with a screaming, misogynistic toddler. Some parrots actually prefer women. Some hate children, other birds or being touched.

Do say: “Does Polly want some gender sensitivity training?”

Don’t say: “Would Polly like to stay in the bread bin until this Zoom meeting is over?”

Sustainable fashion: how to turn your unwanted gems into someone else’s charity shop finds | Give up to give back

Mon Sep 14 , 2020
Share on Facebook Tweet it Share on Google Pin it Share it Email Pin it Lockdown gave many of us the time to have a good old-fashioned clear-out. Photograph: Jovo Jovanovic/Stocksy UnitedThe UK sustainable fashion movement is having a moment. Consumers were expressing a desire for more ethical and less […] 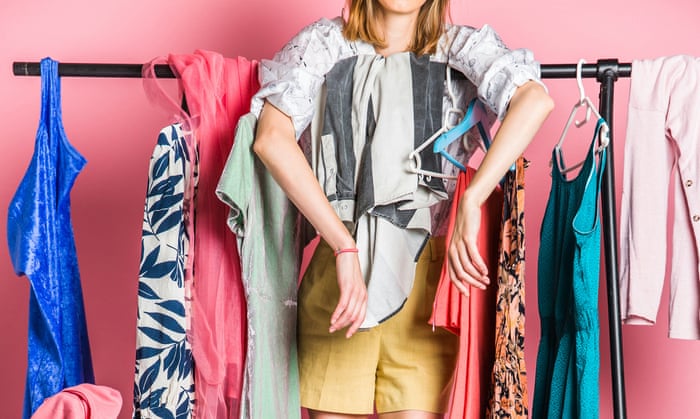