A CHANGE IS GONNA COME: AMERICAN CIVIL RIGHTS LEADERS ON HOW TO FIGHT FOR FREEDOM

USA TODAY is inviting readers to examine how racism continues to shape our country in this free virtual event titled, “A Change is Gonna Come: American Civil Rights Leaders on How to Fight for Freedom“. In collaboration with the Smithsonian National Museum of African American History and Culture in Washington, D.C., this conversation focuses on the ongoing fight for freedom and equality in America.

This event is part of USA TODAY’s “Seven Days of 1961” project, which spotlights seven pivotal protests in 1961 that fueled the civil rights movement and helped end legal segregation and extend voting rights to millions of Black Americans.

This project arrives more than a year after the deaths of George Floyd, Breonna Taylor, Ahmaud Arbery and other Black Americans. It comes amid a divisive national debate over systemic racism, equal access to the voting booth, how we teach American history and what role institutions such as the police, media and government serve in making our society safe and fair for all.

“A Change is Gonna Come” is inspired by mass meetings held in Black communities to end segregation. These gatherings served to keep hope alive through song, prayer and testimony.

This is the final of three virtual events USA TODAY will host as part of its “Seven Days of 1961” project. You can watch the first and second events on-demand here and here. 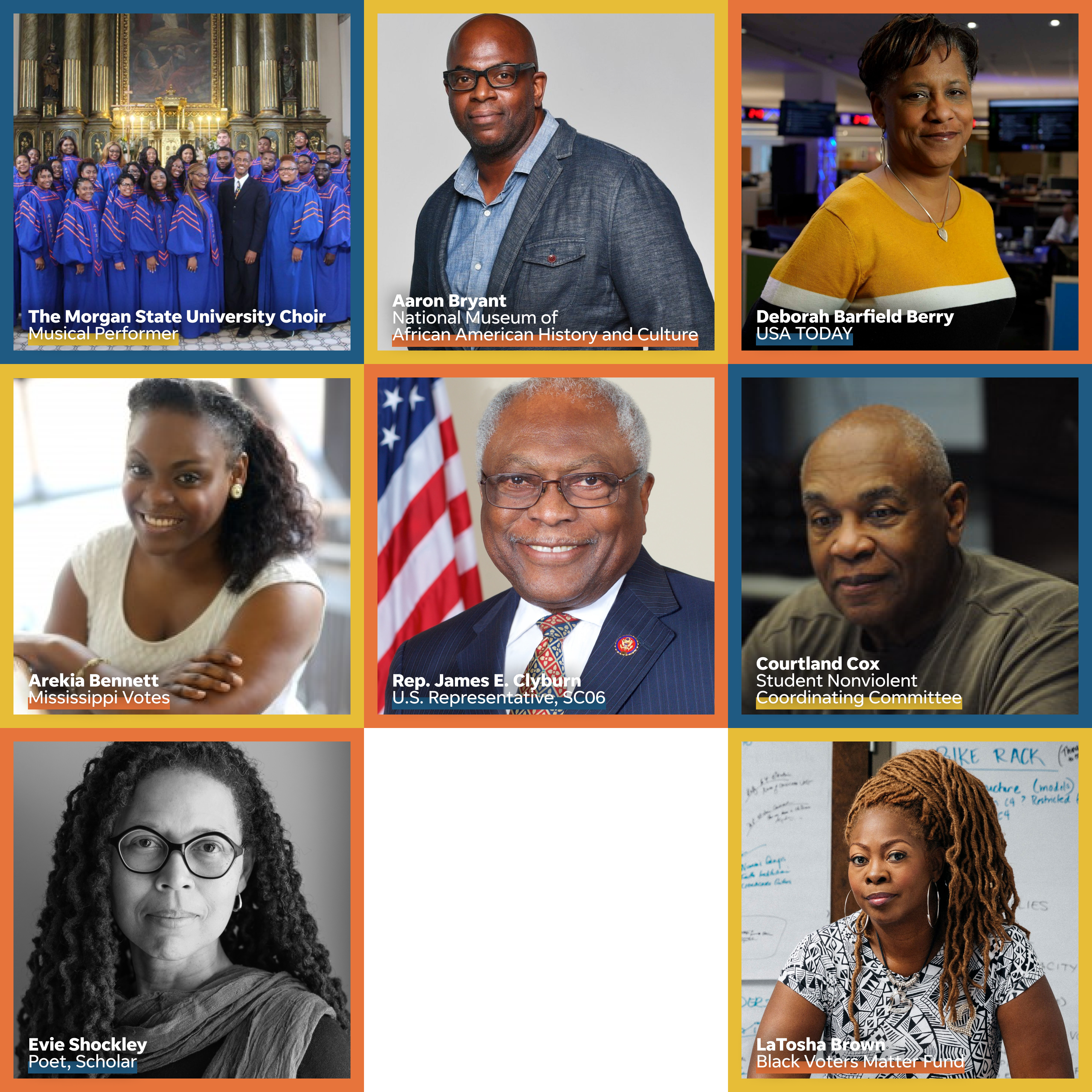 Event poet
Evie Shockley is a poet and scholar. Her most recent poetry collections, “the new black” and “semiautomatic,” both won the Hurston/Wright Legacy Award; the latter was also a finalist for the Pulitzer Prize and the Los Angeles Times Book Prize. Her poetry has appeared internationally in print and audio formats, in English and in translation. She has received the Lannan Literary Award for Poetry, the Stephen Henderson Award, the Holmes National Poetry Prize and fellowships from the Radcliffe Institute for Advanced Study and Cave Canem, among others. Shockley is an English professor at Rutgers University in New Jersey.

Musical performers
The Morgan State University Choir from Baltimore has performed around the world to critical acclaim. Named “Best College Choir” in 2004 by Reader’s Digest magazine, the choir has performed with several major symphony orchestras, including the Philadelphia Orchestra, Chicago Symphony, New York Philharmonic and the National Symphony Orchestra. Eric Conway is the director of the Morgan State University Choir and chairperson of the Fine Arts Department. During his tenure, Conway has led the choir to many acclaimed performances, including a special performance at the service honoring Rosa Parks, the first woman to lie in honor at our nation’s Capitol Rotunda. In 2015, the choir performed for President Barack Obama during his “In Performance at the White House” series.

Moderators
Deborah Barfield Berry is a national correspondent for USA TODAY, where she focuses on voting rights, civil rights and racial disparities. Berry, an award-winning journalist, has spent most of her 35 years in journalism in Washington, D.C., where she has covered Congress and national politics. She was part of a Newsday team that won a 1997 Pulitzer for coverage of TWA Flight 800. More recently, she won the 2019 National Association of Black Journalists Salute to Excellence Award for national news for “Black Women Candidates for Congress Say They’re Reclaiming their Time’’ and several for the USA TODAY project “1619: Searching for Answers.”

Aaron Bryant is a curator at the National Museum of African American History and Culture, and co-curator of the Johnson Publishing Archives. Prior to the Smithsonian, he was curator of Morgan State University’s James E. Lewis Museum of Art in Maryland. Bryant’s visual anthropology and social justice research has received honors from such institutions as the Lyndon Johnson Presidential Library, the Library of Congress, the New York Public Library, the U.S. Justice Department, Congress, the Smithsonian and the Royal Anthropological Institute in the United Kingdom.

Panelists
Arekia Bennett is a Mississippi-based community organizer with a love for young people and social justice. She is the executive director of the youth civic engagement organization Mississippi Votes. She is experienced in youth civic engagement and leadership development, community development, strategizing for political campaigns, and public policy advocacy.

Rep. James E. Clyburn is the majority whip and third-ranking Democrat in the United States House of Representatives, as well as the highest-ranking African American in Congress. He has served as chairman of the Congressional Black Caucus and chair of the House Democratic Caucus. He grew up in Sumter, South Carolina, as the eldest son of an activist, fundamentalist minister and an independent, civic-minded beautician. His memoir, “Blessed Experiences: Genuinely Southern, Proudly Black,” was published in 2015. His legislation has expanded internet access, created national parks, invested in historic preservation, increased access to health care by funding the expansion of community health centers and addressed persistent poverty by creating the 10-20-30 federal funding formula.

Courtland Cox is a former executive committee member of the Student Nonviolent Coordinating Committee, a pivotal organizing group of the civil rights movement. He served as the SNCC representative on the steering committee for the historic 1963 March on Washington and helped organize the 1964 Freedom Summer in Mississippi. In the 1970s, Cox served as secretary general of the sixth Pan-African Congress in Tanzania, as well as on the board of TransAfrica, which advocated for the end of South African apartheid. In more recent decades, he has served in a variety of local and federal government positions, including director of the Minority Business Development Agency (MBDA) at the U.S. Department of Commerce after being appointed by President Bill Clinton. He currently serves as board chair of the SNCC Legacy Project.

LaTosha Brown is an award-winning visionary thought leader, institution builder, cultural activist and artist, and connector. She is a nationally recognized expert in Black voting rights and voter suppression, Black women’s empowerment and philanthropy. Brown is the co-founder of Black Voters Matter Fund and Black Voters Matter Capacity Building Institute. She is also the visionary, founder and co-anchor of a regional network called the Southern Black Girls & Women’s Consortium, a $100 million, 10-year initiative to invest in organizations that serve Black women and girls.

How to Watch FAQ

About USA TODAY
Founded in 1982, USA TODAY reflects the pulse of the nation, serving as host of the American conversation by delivering high-quality, engaging content through unique visual storytelling across all platforms. A media innovator, USA TODAY reaches more than 90M unique visitors each month across digital platforms, with more than 25 million downloads of our award-winning app. USA TODAY is owned by Gannett Co., Inc. (NYSE: GCI).

Canadians, other foreigners will need COVID-19 test a day before flights to U.S.