What we know about disappointing Jaguars tenure

The first coach firing of the 2021 NFL season came early Thursday when the Jacksonville Jaguars finally pulled the plug on Urban Meyer after just 13 games with the franchise. Jacksonville is 2-11.

Offensive coordinator Darrell Bevell will take over as the interim head coach for the rest of the season, and general manager Trent Baalke will remain general manager, Jaguars owner Shad Khan said in a statement.

Meyer’s hiring was met with skepticism from the beginning. It was his first NFL head coaching job after a tenure as one of the most successful college coaches in history, posting a 187-32 overall record and winning three national championships.

The Jaguars have had two winning seasons in the past 15 years, and they have lost 10 games or more for the 10th time in the last 11 seasons.

NEVER MISS A SNAP:Sign up for our NFL newsletter now for exclusive content

ABOUT TIME:Jaguars had to fire Urban Meyer for his embarrassing NFL tenure

What owner Shad Khan said then

When Meyer was hired in January, Khan was optimistic that the team could turn their fortunes around. The Jaguars had posted a 1-15 record during the 2020 season.

“This is a great day for Jacksonville and Jaguars fans everywhere,” Khan said, “Urban Meyer is who we want and need, a leader, winner and champion who demands excellence and produces results. While Urban already enjoys a legacy in the game of football that few will ever match, his passion for the opportunity in front of him here in Jacksonville is powerful and unmistakable.”

A month after his hiring, Meyer hired former Iowa strength and conditioning coach Chris Doyle, who had been accused of bullying and allegedly saying racist remarks while with the Hawkeyes. Doyle quit two days after being hired.

In May, the Jaguars announced  the signing of Tim Tebow … as a tight end. This despite the fact that the former Heisman Trophy-winning quarterback had not played in six seasons and had never played tight end. He was cut after team’s first preseason game.

The Jaguars were fined $200,000 and Meyer received a fine of $100,000 for violation of the league’s policy on contact during off-season practices. The Jags also lost two OTA sessions this coming season.

In October, a video surfaced online showing a woman who was not Meyer’s wife dancing on him in a Columbus, Ohio, restaurant the day after the team lost a road game in Cincinnati. Meyer did not accompany the team back to Jacksonville after the game. Meyer apologized saying his behavior was “stupid” and caused a distraction.

On Wednesday, the Tampa Bay Times published a story in which former Jaguars kicker Josh Lambo revealed that Meyer kicked him while stretching before practice.

Khan explained his reasoning for letting Meyer go and said he will not comment again about the situation until after the season.

“After deliberation over many weeks and a thorough analysis of the entirety of Urban’s tenure with our team, I am bitterly disappointed to arrive at the conclusion that an immediate change is imperative for everyone,” Khan said in a statement. “I informed Urban of the change this evening. As I stated in October, regaining our trust and respect was essential. Regrettably, it did not happen.

At 2-11, the Jaguars have long been eliminated from playoff contention and might be in line for the top pick in the NFL draft for the second year in a row. The team’s four remaining games are against the Houston Texans, New York Jets, New England Patriots and Indianapolis Colts.

The problems with the team are obvious: The Jaguars can’t score and they can’t stop anyone else from scoring. Jacksonville is averaging 13.8 points a game, which ranks next to last in the NFL. It also ranks 30th in total offense. 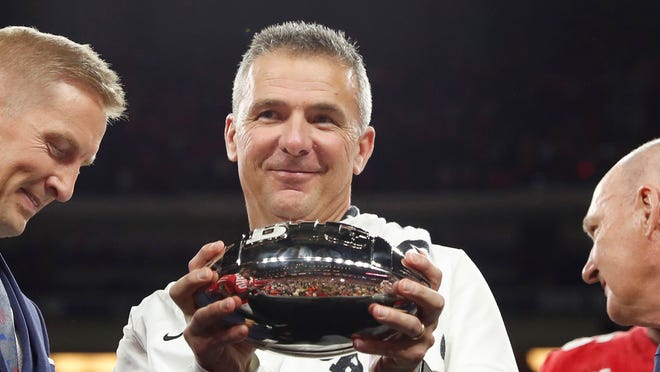 You may be breaking the law and not know it.