The former vice president will soon begin the process of selecting a running mate as the Democratic primary nears its end.

WASHINGTON – As the month begins to wind down, so does Joe Biden’s search for a running mate.

The former vice president’s search for his own Joe Biden has been underway for several months. But there have been few updates on the process since he announced his vice presidential selection committee on April 30.

One thing we do know: The running mate will be a woman. At the final Democratic primary debate between Biden and Sen. Bernie Sanders in March, Biden committed to having a woman on the presidential ticket, and at one point he reportedly had roughly a dozen women the campaign was considering.

Here’s what we know about Biden’s vice presidential search:

Biden has said he hopes to name his running mate around Aug. 1.

Last week, Biden told an Arizona news station his team is doing background checks that should be complete in the next week to 10 days. Biden added he himself plans to interview the remaining candidates.

“First thing I want to make sure is I have somebody – and I think they all are – capable of being president of the United States if something happens,” Biden told 12 News, an NBC affiliate based in Phoenix.

Biden’s pick will likely be announced before the Democratic National Convention scheduled for mid-August.

The Biden campaign declined to offer an update on the time frame for a decision. 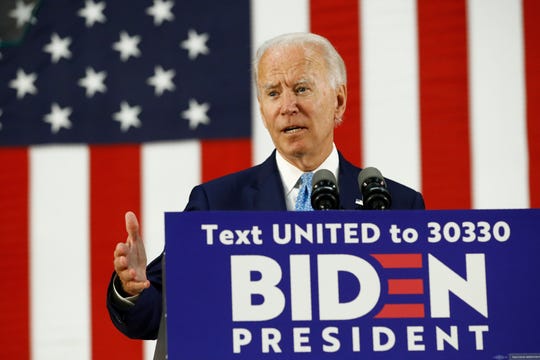 Who is still in the running?

Although there were about a dozen women initially on Biden’s list of possible running mates, that list has reportedly narrowed. Several names have come to the forefront over the past couple of weeks as the protests seeking justice for George Floyd, a Minnesota man who died in police custody, have continued across the county.

Monday evening during an interview with MSNBC’s Joy Reid, Biden said four Black women are under consideration, but he declined to name the women.

He also said four women have already been vetted, and the list will narrow once the process has been completed.

At the same time, several possible candidates have taken their name out of the running.

Sen. Amy Klobuchar of Minnesota said in June that she would remove her name from consideration, saying “I think this is a moment to put a woman of color on that ticket.”

“If you want to heal this nation right now – my party, yes, but our nation – this is sure a hell of a way to do it,” Klobuchar said on MSNBC.

Sen. Catherine Cortez Masto of Nevada, who was reportedly in Biden’s “top 3” as a running mate, said in late May that she was taking herself out of the running.

“It is an honor to be considered as a potential running mate, but I have decided to withdraw my name from consideration,” she said in a statement.

Presumptive Democratic presidential nominee Joe Biden laid out his agenda for racial and economic justice during an online event with Black trade unionists, telling them “you’ll never have a more union friendly president, if I get elected.” (July 15)

Does the running mate choice even matter?

Vice presidential picks have been often been seen as bringing a strength where the top of the ticket has a weakness, whether that’s influence in a certain battleground state or the ability to attract voters from different age groups. However, it’s rare that the vice presidential choice is seen as heavily influencing voters. (Lyndon B. Johnson is often cited as a running mate who did help the top of the ticket when John F. Kennedy ended up winning Texas, Johnson’s home state.)

But this year, Biden’s choice is being closely examined by several voting blocs.

Biden is being pressed by several groups to choose a running mate who is a woman of color. Most recently, the advocacy group She The People outlined concerns about Biden’s outreach to women of color, particularly in battleground states. One way to help gain support among the crucial voting bloc was for Biden to pick a woman of color as his running mate, a recent She the People memo stated.

“For me, a woman of color is a must,’’ said Aimee Allison, founder and president of She the People. “We have a deep bench.”

Black women, in particular, have said they would like to see a Black woman as vice president. Black women are historically one of the Democratic Party’s most loyal voting blocs.

“We are demanding a return on our voting investment in 2020,” Glynda Carr, president and CEO of Higher Heights for America, which works to get Black women elected into office, told USA TODAY earlier this year. “That is in the form of policies that directly center Black women in our family, and it is about us having seats at all decision-making tables.”

“I am not committed to naming any but the people I’ve named, and among them are four Black women,” Biden said.

He added that “Black women have supported me my entire career.”

“You all act like all of a sudden there was an epiphany in South Carolina,” he said, referencing his primary win that revived his campaign and sent him on the path to dominate Super Tuesday.

With the election coming up in November, many wonder if we could have a contested election and how likely is that to happen?